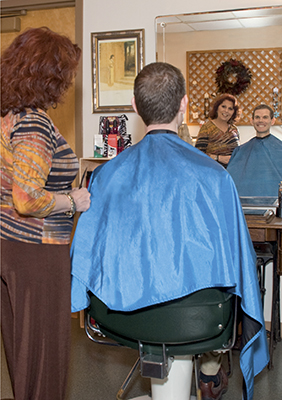 One of my most vivid memories as a young child was visiting my uncle’s barbershop with my dad. It was always a fun and exciting place with so many things going on. The sights, the smells, the sound of the clippers buzzing and scissors snipping always fascinated me. And I just loved the barber chairs going up and down!
One day when my dad and I were there, a man came into the barbershop with long messy hair and a big scruffy beard, holding his head down and not looking at anyone. He looked unfriendly as he sat waiting his turn. My dad could tell I was frightened but encouraged me to just “watch.”
My eyes were riveted on the barber as he laid the man back in the chair. Then he began to shampoo his hair. Slowly the barber began cutting and snipping and buzzing. The man’s hair was beginning to take shape. More and more hair fell on the floor as the barber continued to cut. Then came the steaming towels, followed by lots and lots of shaving cream, then more cutting and clipping. Before long, I could not believe my eyes!
Was this the same person? “It must be,” I thought. I had never taken my eyes off of him! But he looked so different. His hair was now cut and combed, his beard was trimmed, and he looked great. And, you know, there is one thing I will never forget. As the barber slowly turned the chair around toward the mirror, this same man, who had avoided making eye contact before, was now smiling! Rising from the barber chair, he stood up straight and began walking with his head held high. He even smiled at us as he left. And I was not afraid anymore.
Seeing this man’s transformation made such an impact on me, it influenced my career choice, and I became a hairdresser. I have been a hairdresser for over forty years, and I never tire of seeing the change that takes place when men and women are confident in their appearance. Yes, something happened to me that day, but it was not until many years later that I came to understand from God’s Word just how important our physical appearance is and what an effect it can have on others. Let’s go together to the Word and see what God shows us concerning our physical appearance and how it is one of the ways we can let that Christ in us shine.
As we begin our journey, we will start at the Book of Genesis, where God sets forth the foundations of all life. In God’s eyes we are beautiful and awesome.
Genesis 1:31:
And God saw every thing that he had made, and, behold, it was very good….
This is how God, the Creator of the heavens and the earth, sees His children. Let’s see what else God’s Word says about us.
Psalms 139:14:
I will praise thee; for I am fearfully and wonderfully made: marvellous are thy works; and that my soul knoweth right well.
The human body is one of the most exquisite, complex systems there is. We are fearfully, or awesomely, and wonderfully made. Our body is the vehicle that God chose to move His Word, and God’s Word gives tremendous examples of how one’s physical appearance can have an effect on others and bring glory to Him. Our bodies come in all shapes and sizes, and we have seen that they are part of the marvelous works God designed. God did His part in forming the human body; and now, the care and maintenance of our physical appearance depends on us.
One of the records in the Word that helps explain the importance of caring for our appearance begins in Genesis 37. Joseph was sold by his brothers and arrived in Egypt as a slave. He was purchased by Potiphar, the captain of the executioners and Pharaoh’s chief bodyguard. This was not a good situation, but look what Genesis 39:2 says:
And the Lord was with Joseph, and he was a prosperous man; and he was in the house of his master the Egyptian.
Even under these conditions, God was both willing and able to prosper Joseph and give him all he needed.
Genesis 39:4:
And Joseph found grace in his [Potiphar’s] sight, and he served him: and he [Potiphar] made him overseer over his house, and all that he had he put into his hand.
Potiphar grew to trust Joseph because he was a good man and well-favored (Genesis 39:5 and 6). But in a moment of time, things changed. Joseph was falsely accused by Potiphar’s wife and was thrown into the prison with Pharaoh’s prisoners. Other events took place, and eventually Joseph was summoned by Pharaoh to interpret his dreams.
Genesis 41:14:
Then Pharaoh sent and called Joseph, and they brought him hastily out of the dungeon: and he shaved himself, and changed his raiment, and came in unto Pharaoh.
In the March/April 1994 Way Magazine article “Barbers and Beards,” we learn that the Hebrew men of that time usually wore long beards, as a symbol of manhood and in dedication of one’s strength to God. Yet, in order to conform to Egyptian protocol, Joseph put aside the customs of his own people and shaved his face. God worked within him, and we see how Joseph’s physical presentation put him in the best position to glorify his God. Being ready physically and spiritually brought deliverance not only to his life but also to his family. This series of events also enabled the Christ line to continue….

This is an excerpt from the November/December 2010 issue of The Way Magazine.
Copyright© 2010 by The Way International. All rights reserved.
For more information on subscribing to The Way Magazine, Click Here