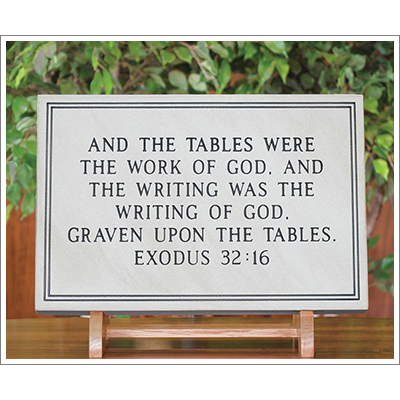 The Word of God has integrity! That’s a bold statement. How can I say that? I can say that the Word of God has integrity because I have looked into the Word of God to help me understand this great reality. I have believed it and seen God’s promises come to pass in my life. When we understand and believe that the Word of God has integrity, we are able to take believing action on it and receive God’s promises.
I would like to invite you to look into the Word with me and discover what the Word says about its own integrity. Then we will see how believing the integrity of God’s Word brings the promises of God to pass. The greatest of God’s works is His Word; and when believed it produces what God says.
The Word of God speaks for itself regarding its integrity. As we look into the Word to develop an understanding of integrity, we will see some occurrences where the Word speaks of itself.
In Exodus 31 the Word declares that it was “written with the finger of God.”
Exodus 31:18:
And he gave unto Moses, when he had made an end of communing with him upon mount Sinai, two tables of testimony, tables of stone, written with the finger of God.
In ancient times it was not unusual for important truths and events to be engraved into tablets of stone. The word “testimony” here refers to God’s Word. The phrase “with the finger of God” is a figure of speech emphasizing God as the Author of His Word.
Looking into the Book of Job we can learn more about how important words were preserved during this time.
Job 19:23 and 24:
Oh that my words were now written! oh that they were printed in a book!
That they were graven with an iron pen and lead in the rock for ever!
Job desired that his words should be preserved. Iron, lead, and rock are long-lasting substances that were used during the time of Job to preserve words, saving them in a complete and unbroken condition. Words were inscribed with “an iron pen” into books; this iron pen would have been a hard-pointed instrument. Some books were made of soaked palm leaves, and the writing was done with an iron pen. Words written on palm leaves never faded nor were eaten by worms.
Another mode of preservation used during this time was cutting letters into stone and pouring molten lead into them. The lead poured into the rock preserved the writing, permitting the words to remain for a very long time. From these examples we see various ways that the integrity of the Word of God may have been preserved so that we can be blessed with its accuracy and integrity today.
In II Timothy 3:16 the Word describes itself as the “God-breathed” Word.
II Timothy 3:16:
All scripture is given by inspiration of God, and is profitable for doctrine, for reproof, for correction, for instruction in righteousness.
The word “All” refers to all scripture, all without exception, from Genesis 1:1 to Revelation 22:21. The five words “given by inspiration of God” are actually one word in the Greek. This word is theopneustos, which literally means “God-breathed.” We see again that God is the Author of His Word; it is God-breathed. The following verse tells us why God gave this God-breathed Word.
II Timothy 3:17:
That the man of God may be perfect, throughly furnished unto all good works.
The first word in II Timothy 3:17 is “That,” indicating purpose. The purpose of the Word of God is that “the man of God may be perfect, throughly furnished unto all good works.” Who is “the man of God” in this verse? It’s one who speaks for God. Whenever we speak for God, we become His spokesperson. God’s Word says we are equipped to speak for Him; we are throughly equipped unto good works. What the Word says we are, we are—because the Word is truthful; it’s God’s Word.
The Word is truth. This is the testimony that it gives of itself.
Psalms 119:142:
Thy righteousness is an everlasting righteousness, and thy law is the truth.
“Thy law is the truth” means what it says. The Word, “thy law,” is truth. Hebrews 6:18 states that it is impossible for God to lie. The words of the Word are steadfast and upright. They have integrity because they are the words of God; they are truth.
Jesus Christ is the living Word. As God’s Son, Jesus Christ had integrity. He lived by the standard of his Father’s Word, which is truth.
John 14:6:
Jesus saith unto him, I am the way, the truth, and the life: no man cometh unto the Father, but by me.
Jesus Christ said that he is the way, the truth, and….

This is an excerpt from the January/February 2007 issue of The Way Magazine.
Copyright© 2007 by The Way International. All rights reserved.
For more information on subscribing to The Way Magazine, Click Here