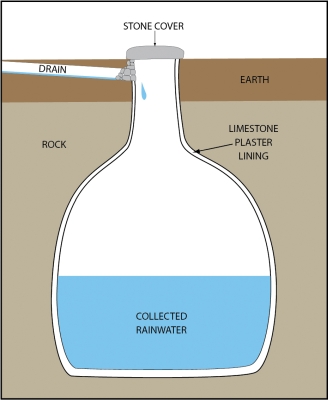 Cisterns were well known in Bible times. But today the word “cistern” is all but lost in our vocabulary. We can still find the word in the dictionary, and we still have cisterns at some of our farms that are located in isolated areas.
A cistern can be described as an underground receptacle for collecting rainwater. This rainwater is collected from the runoff from roofs or through drains. In Bible times, people that had cisterns in their homes usually dug them in their enclosed courtyard. This protected the cistern and its precious water from outsiders. A stone or wooden cover placed over the opening would keep the cistern clean until the rains came. This cover would also keep the water clean and prevent people and animals from falling in.
Cisterns could be hewn out of rock or dug out of clay. They were often bell- or pear-shaped and had a small opening at the top. Early cisterns often became dry and cracked before the rains came. Then they would no longer hold water. But about the time of Israel’s conquest of Canaan, the invention of limestone plaster made it possible to line the cisterns, making them waterproof. Cracked cisterns could also be mended with this plaster so that they could again hold water.
In the Bible, sometimes the word for cistern is translated “pit.” Such cisterns, or pits, could be dug deep in the ground to store water where men worked in the fields or took care of the flocks. When the people moved to another area, the cistern simply became a dried-up pit as in the time of Joseph.
Genesis 37:24:
And they took him [Joseph], and cast him into a pit [cistern]: and the pit was empty, there was no water in it.
Joseph’s brothers were jealous of their father’s attention to him and cast him into a large, old cistern. But Joseph’s brother Judah suggested that they not slay Joseph and have his blood on their hands, but instead, draw him up out of the pit and sell him to traders.
Genesis 37:28:
Then there passed by Midianites merchantmen; and they [the brothers] drew and lifted up Joseph out of the pit, and sold Joseph to the Ishmeelites for twenty pieces of silver: and they brought Joseph into Egypt.
Cisterns were most necessary in the Bible lands because of the uneven rainfall. Most of the rains come in the winter months. Also, the amount of annual rainfall throughout the Bible lands varies much, from nearly none at the Dead Sea to eight inches in eastern Jordan to forty inches in upper Galilee.
Some cisterns were part of a larger system of water storage. Great People of the Bible and How They Lived, by The Reader’s Digest Association, provides a detailed drawing and a description of a large system of cisterns. This system was constructed by a community of Essenes at Khirbet Qumran on the northwestern coast of the Dead Sea in the second century B.C. The Essenes, or “Holy Ones,” separated themselves from a Jerusalem that they felt had become too worldly. Some worked as scribes, and their transcriptions are known as the Dead Sea Scrolls.
The water for the cisterns at Khirbet Qumran came from a waterfall that fed their community. The Essenes channeled its runoff through a bathing pool and into conduits supplying seven major cisterns. This system provided water for their purification and baptismal rituals.
Cisterns are also referred to symbolically, or figuratively, in God’s Word. A verse that gives us a good picture of cisterns used this way is Jeremiah 2:13:
For my people have committed two evils; they have forsaken me the fountain of living waters, and hewed them out cisterns, broken cisterns, that can hold no water.
Dr. Victor Paul Wierwille gave a good explanation of Jeremiah 2:13:

A fountain has an unlimited supply of water. When people forsake God who is a fountain, they hew out for themselves cisterns which are man-made and which hold only a limited amount. If the cistern is a fifty-barrel one, fifty barrels is the maximum supply a person can get from it. When people forsake God, the fountain of living waters, they hew out for themselves, not fountains, but cisterns.  Furthermore, those cisterns are broken cisterns; always leaking away their limited supply.

Israel was placing their trust in other gods (broken cisterns), instead of the one true God.
Cisterns served an important purpose in Bible times, but they could leak and had only a limited supply. However, we put our trust in the one true God, “the fountain of living waters” that will never go dry.

This is a reprint from the November/December 2009 issue of The Way Magazine.
Copyright© 2009 by The Way International. All rights reserved.
For more information on subscribing to The Way Magazine, Click Here