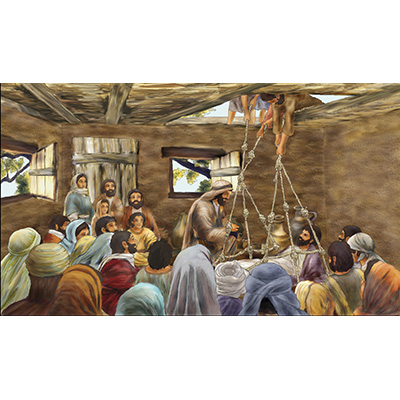 Have you ever been inspired by an ordinary person doing extraordinary things? Perhaps someone had mastered a skill you admired. Recently I watched a television program about a man who had some physical limitations. Not only had he figured out how to do everyday tasks easily, but he was accomplishing things that I haven’t dreamed of doing. What inspired me the most was that he stayed focused on what he had and not on what he lacked.
We too can succeed in life by staying focused on what we have. Romans 8:37 declares that “we are more than conquerors through him that loved us.” Jesus Christ is our great example of what it means to have a mind-set of being more than a conqueror. His life and accomplishments in his earthly ministry inspired others to act on the Word, and they continue to inspire us today. We can also prevail in life, being more than conquerors. Our confidence in God and who He has made us and our boldness to act on the Word in overcoming life’s challenges can inspire others to believe and manifest the more abundant life.
Let’s look at what it means to be more than a conqueror. One definition is “to gain a surpassing victory.” Another definition is “to have victory beyond measure.” Jesus Christ absolutely accomplished victory beyond measure. In every situation he faced, he maintained the more-than-a-conqueror mind-set. He was tempted in all points, so he had ample opportunities to keep his thoughts riveted on God’s Word. He chose not to be swayed by the circumstances surrounding him. We can see this by his response to the Devil in Luke 4.
Luke 4:4:
And Jesus answered him, saying, It is written, That man shall not live by bread alone, but by every word of God.
Jesus Christ was in the wilderness for forty days without food. Jesus was human, and the Word tells us “he afterward hungered” (Luke 4:2). The Devil then challenged him to turn stones into bread. Jesus didn’t allow how he felt physically to determine the outcome of this personal challenge. Look at our lord and savior’s answer—“It is written.” He stood on God’s Word and prevailed. As great a man as he was, Jesus didn’t rely on his own natural ability. He relied on God and His Word.
John 5:30:
I can of mine own self do nothing: as I hear, I judge: and my judgment is just; because I seek not mine own will, but the will of the Father which hath sent me.
He came to do God’s will. He had first built the Word in his own life so that he could stand on it and then help others.
While Jesus Christ was healing people and carrying out the will of God, more obstacles came up. One example of this is in Luke 5, when a man sick of the palsy was let down from the roof by his friends. These friends set the man before Jesus, believing with him for his healing.
Luke 5:20-26:
And when he [Jesus] saw their faith [believing], he said unto him, Man, thy sins are forgiven thee.
And the scribes and the Pharisees began to reason, saying, Who is this which speaketh blasphemies? Who can forgive sins, but God alone?
But when Jesus perceived their thoughts, he answering said unto them, What reason ye in your hearts?
Whether is easier, to say, Thy sins be forgiven thee; or to say, Rise up and walk?
But that ye may know that the Son of man hath power upon earth to forgive sins, (he said unto the sick of the palsy,) I say unto thee, Arise, and take up thy couch, and go into thine house.
And immediately he rose up before them, and took up that whereon he lay, and departed to his own house, glorifying God.
And they were all amazed, and they glorified God, and were filled with fear [respect], saying, We have seen strange things to day.
Even though the scribes and Pharisees reasoned how he could forgive sins, Jesus Christ stayed set on healing the man sick of the palsy. The man was delivered, and the onlookers glorified God. How inspiring it would have been to hear Jesus Christ teach the Word and then to see him carry it out even when besieged by those who objected to his actions!
Yes, Jesus Christ faced many obstacles in life. But he had studied God’s Word so that he had great examples to follow when challenges arose. He would have been inspired by faithful believers like Noah, Abraham and Sarah, and Moses, to name a few. They overcame obstacles as they believed God rather than the circumstances surrounding their situations. Like them, Jesus Christ steeled his mind on the Word rather than on the circumstances at hand. Records from the Old Testament such as Isaiah 40:4 would have encouraged him and strengthened his heart and mind to conquer the obstacles he faced.
Isaiah 40:4:
Every valley shall be exalted, and every mountain and hill shall be made low: and the crooked shall be made straight, and the rough places plain.
No matter how vast or large and overwhelming the circumstances were, God could level them. Jesus Christ knew he would face difficult challenges, but with God’s Word in his mind and a firm belief that God had called him, he continued to carry out God’s will even when the predicament looked impossible….

This is an excerpt from the November/December 2007 issue of The Way Magazine.
Copyright© 2007 by The Way International. All rights reserved.
For more information on subscribing to The Way Magazine, Click Here