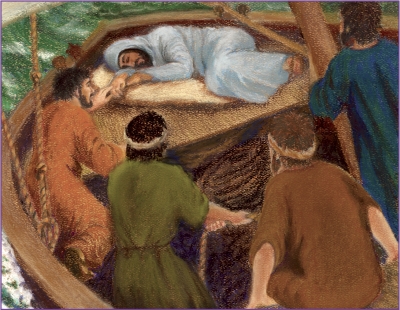 When we look at our beds and sleeping quarters today, we may see a bed with box springs and a lovely, soft mattress. But when we turn our thoughts to the time of the Bible, we find that beds and sleeping quarters were generally much more simple and basic. Just as today, these varied according to one’s economic status in life and whether one was nomadic or settled.
Funk and Wagnalls New “Standard” Bible Dictionary gives some background on Eastern sleeping customs:

In the simpler conditions of life reflected in the Bible it was customary to sleep in one’s ordinary clothing, using the outer garment or cloak for a covering (Exodus 22:27). In more advanced conditions, an ordinary rug or mat was used as a bed. Later, a mattress either took the place of the mat or was used with it, and together with a pillow and a simple coverlet or quilt for cold nights made up the bed furniture of a “common” individual.

Those who traveled also had very simple sleeping accommodations. There were not many towns, so inns were placed at convenient spots for the benefit of those traveling. The traveling man went into the inn and found a vacant spot, wrapped his mantle (outer cloak) around him and lay down to sleep. Barbara M. Bowen discusses this in Strange Scriptures That Perplex the Western Mind:

The inns were open to everyone from all parts of the country, all night, and never closed to the poor. No matter how dirty or ragged or forsaken a man was he was always welcome at an inn. It was much like a home to these weary travellers, they met people from far countries and they talked and smoked and parted in the morning.

Some inns had a guest chamber that was a large upper room. This is the kind of room Jesus reserved to meet with his disciples. They ate and slept in this room, and no women were allowed.
Luke 22:11 and 12:
…The Master saith unto thee, Where is the guestchamber, where I shall eat the passover with my disciples?
And he shall shew you a large upper room furnished: there make ready.
In Bible times, common people with a family usually had one room large enough for sleeping and eating, and they slept with their children.
Luke 11:7:
…the door is now shut, and my children are with me in bed….
The record in Luke 11 is very much like the arrangements for sleeping in recent times in Syria and Palestine among the common people, as Abraham Mitrie Rihbany explains in The Syrian Christ.

The cushion-mattresses are spread side by side in the living-room, in a line as long as the members of the family, sleeping close together, require. The father sleeps at one end of the line, and the mother at the other end, “to keep the children from rolling from under the cover.” So the man was absolutely truthful when he said by the way of excuse, “My children are with me in bed.”

The Old Testament also gives illustrations that show some of the sleeping customs of the day. In the Book of Judges, Sisera, a military commander, was running from Israel during wartime and was desperate for a place to hide.
Judges 4:18:
And Jael [wife of Heber] went out to meet Sisera, and said unto him, Turn in, my lord, turn in to me; fear not. And when he had turned in unto her into the tent, she covered him with a mantle.
According to Eastern custom, no man was permitted to intrude into a woman’s tent and to do so meant the penalty of death. Sisera thought no one would look in a woman’s tent for him, so he felt safe. (Now turn to Judges 4:19, and you can read the rest of the story.)
With the record of Ruth, the events are very different, but the sleeping arrangements are again very simple. Boaz went to the threshing floor to take care of his grain. Ruth was given instruction from her mother-in-law, Naomi, as to what she should do.
Ruth 3:7:
And when Boaz had eaten and drunk, and his heart was merry, he went to lie down at the end of the heap of corn [grain]: and she [Ruth] came softly, and uncovered his feet, and laid her down.
The custom was, after the work was done, that each worker lay down near his own grain and covered himself with his mantle. So Ruth crept under the edge of the lower part of Boaz’s mantle and lay down, just as Naomi had instructed. (Now, you can read the rest of the story, starting with Ruth 3:8.)
All of this reading is good for us to use in our research. We read before and after the subject to get the records complete—“in the context.”…

This is an excerpt from the November/December 2011 issue of The Way Magazine.
Copyright© 2011 by The Way International. All rights reserved.
For more information on subscribing to The Way Magazine, Click Here