Home » Articles » Workmen of the Word » Esther: God’s Deliverance in an “Impossible” Situation 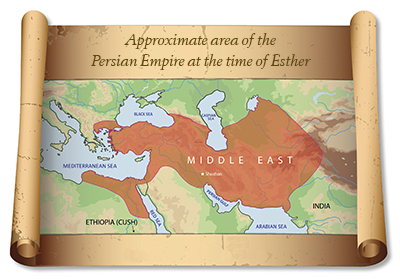 The Book of Esther has all the intrigue of a modern-day thriller: a magnificent location, an evil enemy, a courageous hero and heroine, and life-and-death situations. But most significant to us, it shows God’s powerful hand of deliverance in a seemingly “impossible” situation. Because the Bible really is the revealed Word of God, the Book of Esther gives a true account of real people who faced real dangers to their lives.
So who was Esther? What can we learn by studying her life and times? By surveying the Book of Esther, we will see God’s deliverance for His people and realize that we too can receive God’s deliverance—no matter how “impossible” our situation may appear.
As we begin looking at this record, let’s set the stage, so to speak, for this exciting, real-life drama. The opening verse tells us when and where the Book of Esther took place: during the time of the Persian Empire in the reign of King Ahasuerus, at his palace in Shushan.
Esther 1:1 and 2:
Now it came to pass in the days of Ahasuerus, (this is Ahasuerus which reigned, from India even unto Ethiopia [Cush], over an hundred and seven and twenty provinces:)
…king Ahasuerus sat on the throne of his kingdom, which was in Shushan the palace.
Let’s stop a moment and explore some of the background of the Persian Empire. When the Persians conquered the Babylonians, the Babylonians had already conquered the kingdom of Judah and brought a large number of Judeans captive to Babylon. In Esther’s time the vast Persian Empire reached from ancient “India even unto Ethiopia,” the two extreme boundaries of the known world at that time. This was an enormous area encompassing thousands of square miles!
The Persians were unusual in that they treated their conquered peoples with leniency, including those of Judah, who even in captivity throughout the Persian Empire were allowed to worship their own gods and live by their own customs. According to one secular source, the city of Susa, or Shushan, was one of three royal cities that served as the Persian king’s headquarters during the year. The winter palace at Shushan was perhaps the finest of the three locations.
Now that we’ve gotten a glimpse into the “when” and “where” of the Book of Esther, let’s see who our four main characters are. Ahasuerus was the king of Persia at this time (Esther 1:2). Mordecai was a Judean man in captivity, who lived in Shushan and served in the king’s palace.
Esther 2:5 and 6:
Now in Shushan the palace there was a certain Jew [Judean], whose name was Mordecai, the son of Jair, the son of Shimei, the son of Kish, a Benjamite;
Who had been carried away from Jerusalem with the captivity which had been carried away with Jeconiah king of Judah, whom Nebuchadnezzar the king of Babylon had carried away.
Esther, whose Hebrew name was Hadassah, was Mordecai’s cousin—a young Judean woman whom he had raised as his daughter.
Esther 2:7:
And he [Mordecai] brought up Hadassah, that is, Esther, his uncle’s daughter…whom Mordecai, when her father and mother were dead, took for his own daughter.
Haman, an Agagite, was the villain, the “bad guy.” He is called “this wicked Haman” and was the enemy of God’s people (Esther 3:10; 7:6; 8:1; 9:10 and 24). The Agagites were descendants of Agag, king of the Amalekites, who were established enemies of God’s people.
Exodus 17:14 and 16:
And the Lord said unto Moses…I will utterly put out the remembrance of Amalek from under heaven.
…the Lord hath sworn that the Lord will have war with Amalek from generation to generation.
Our main characters, then, are Mordecai and Esther, the hero and heroine; Haman, the enemy of God’s people; and the king, Ahasuerus.
So what is the “plot”? What happened in this true, dramatic account? To begin with, King Ahasuerus, having deposed his former queen, Vashti, sought another queen. In what was like a modern beauty pageant, Esther was taken to the palace and eventually selected to be queen in Vashti’s place. However, Esther was instructed by Mordecai not to reveal “her people nor her kindred” at this time (Esther 2:10).
Esther 2:16 and 17:
So Esther was taken unto king Ahasuerus into his house royal….
And the king loved Esther above all the women, and she obtained grace and favour in his sight more than all the virgins; so that he set the royal crown upon her head, and made her queen instead of Vashti.
After Esther became queen, Mordecai learned of a plot to kill the king and told Esther. She told the king what Mordecai had discovered—and the plot failed (Esther 2:21-23). After these things, Haman was promoted to a powerful seat of authority by King Ahasuerus.
Esther 3:1:
After these things did king Ahasuerus promote Haman the son of Hammedatha the Agagite, and advanced him, and set his seat above all the princes that were with him.
Along with this promotion, the king made a commandment that his servants in the king’s gate were to bow down to Haman and reverence him, which they did—all of them, that is, except Mordecai. When Haman saw that Mordecai refused to bow down to him, he became furious, and he sought to not only get rid of Mordecai, but also to destroy all the Judeans who were living throughout the Persian Empire….

This is an excerpt from the September/October 2016 issue of The Way Magazine.
Copyright© 2016 by The Way International. All rights reserved.
For more information on subscribing to The Way Magazine, Click Here