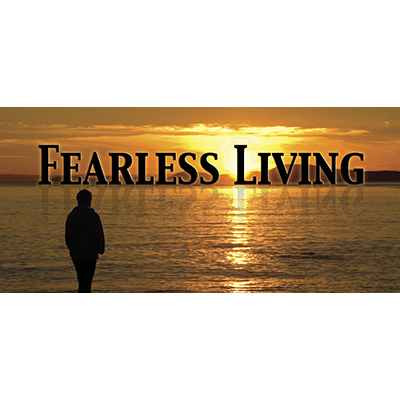 There are many keys and principles to building fearless living. There is, however, a fundamental principle to living fearlessly. This principle is being spiritually minded upon the Word of God. We become spiritually minded by changing our focus—from the power and authority of the world and the circumstances of life to the power and authority we have as sons of God. To see this principle in action, we will look at the Apostle Peter. We will see how he was faced with tremendous fear and how he overcame that fear. Then, we will cover some practical steps that we as sons of God can incorporate in our lives to live fearlessly.
To appreciate the importance of fearless living, we must first understand what happens when we have fear. Proverbs provides a vivid illustration of what man’s fear brings.
Proverbs 29:25:
The fear of man bringeth a snare: but whoso putteth his trust in the Lord shall be safe.
A snare is a device for catching birds or other animals. The snare captures the animal and limits its movement. Fear is like that—it limits free movement. Our Founding President, Dr. Victor Paul Wierwille, often said that “fear is sand in the machinery of life.” If sand is placed in even a well-oiled machine, its workings or movements will be hindered and eventually the machine will seize and stop working. We eliminate fear by taking believing action on what the Word says. Then we can move about freely in our lives.
In The Bible Tells Me So, we read, “There is power in believing. There is power in this world to which you and I as born-again believers have easy access. This power will enable us to overcome our shortcomings and our difficulties, bringing release and victory to our lives.” Ephesians 1:19 states, “And what is the exceeding greatness of his power to us-ward who believe, according to the working of his mighty power.” God’s power is at our disposal when we are believing His Word and living fearlessly. Since we want the freedom to move where we will, we want to develop fearless living so that we can experience all of the great things that God has in store for us, His children.
In the life of Peter, we have a tremendous example of a man who went from being full of fear to mightily manifesting the power of God in his life. Let’s look at how he overcame fear and then consider how we can eliminate fear when facing it in our lives.
John 20:19:
Then the same day at evening, being the first day of the week, when the doors were shut where the disciples were assembled for fear of the Jews [Judeans], came Jesus and stood in the midst, and saith unto them, Peace be unto you.
Peter was one of the disciplined followers of Jesus Christ assembled here. At this time Peter’s mind was focused on the circumstances that surrounded him. The master whom Peter loved and followed had recently been tortured and crucified. The Judean religious leaders had stirred up the mob against Jesus Christ, and at their bidding the Romans crucified him. Peter was a “marked man” by his association with Jesus. He was not freely moving about. He was snared in fear.
Now, Peter was not generally a fearful man. By trade he was a fisherman. Fishermen were strong and tough. Their exposure to all kinds of weather made them naturally hardy and fearless. But no matter how strong or composed we generally are, there still may be things that tempt us to fear. What made Peter fearful in this instance was his fear of the Judeans and the power they seemed to have. But something changed all that. Look at Peter a short time later: no longer a man full of fear, he was boldly speaking the Word.
Acts 2:14:
But Peter, standing up with the eleven, lifted up his voice, and said unto them, Ye men of Judaea, and all ye that dwell at Jerusalem, be this known unto you, and hearken to my words.
Only days earlier Peter had been in fear of these Judeans, hiding from them behind closed doors. But here, not only was he not hiding, he was addressing them directly. He was boldly holding forth the truth to them. The only thing that stands between Peter being behind closed doors in fear and here, where he is boldly proclaiming God’s Word, is his receiving and manifesting power from on high, holy spirit, earlier on that day of Pentecost. Peter was born again of God’s spirit.
What is it about receiving and manifesting holy spirit that eliminates fear? When we are born again, we receive God’s gift of holy spirit. We now have a source of spiritual help and power to overcome fears and weaknesses. However, fear is not eliminated simply with the internal, subjective receiving of holy spirit because fear is a product of our minds. Fear is wrong thinking, wrong believing. When we are born again, we have the same mind we had before the new birth. Our responsibility once we are born again is to renew our minds. This is accomplished by putting the Word on in our minds and then acting accordingly….

This is an excerpt from the March/April 2009 issue of The Way Magazine.
Copyright© 2009 by The Way International. All rights reserved.
For more information on subscribing to The Way Magazine, Click Here