Home » Articles » The Way of Abundance and Power » Followers of the Way, the Lord Jesus Christ 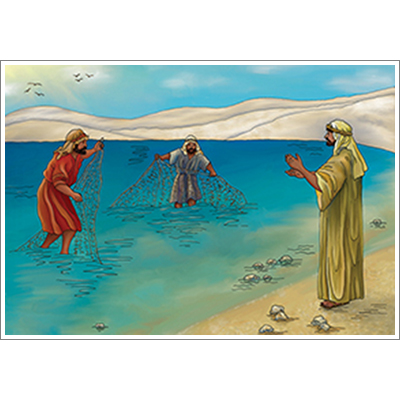 Growing up and learning about the life and ministry of Jesus Christ, I often wondered what it would have been like to live during his earthly ministry and to be there as one of his followers. How wonderful it would have been to hear Jesus teach the “Sermon on the Mount” or to witness firsthand how he stilled the waters on the Sea of Galilee. I wondered what it would have been like to see the miracles he did—how he healed the sick, cast out devil spirits, and raised the dead.
Then I came to this ministry and learned the greatness of what we’ve been called to as followers of Jesus Christ in this day and time. It thrilled my heart to learn that Jesus Christ himself said, “Verily, verily, I say unto you, He that believeth on me, the works that I do shall he do also; and greater works than these shall he do; because I go unto my Father” (John 14:12).
In order to live according to this great truth Jesus Christ revealed, we endeavor to build our Biblical understanding regarding our calling as followers of the Lord Jesus Christ. We will look at Jesus Christ’s earthly ministry as the way to God, and we’ll see how he invited people to follow him and the conditions he set to be a follower. Next, we will consider the Grace Administration in which we live to see from the Scripture our calling of God to be followers of the Lord Jesus Christ. Finally, we will see that God has placed us in Christ’s stead to declare the way for others to follow.

Jesus Christ himself declared, “I am the way.” It was following the last supper, after Jesus already knew that his death was imminent, that he uttered this tremendous truth while his disciples were gathered with him. Jesus had taught his disciples, endeavoring to prepare them for this time. Yet one of his disciples still had an important question weighing upon his heart. John 14 records the question posed and Jesus’ response.
John 14:5 and 6:
Thomas saith unto him, Lord, we know not whither thou goest; and how can we know the way?
Jesus saith unto him, I am the way, the truth, and the life: no man cometh unto the Father, but by me.
Jesus Christ boldly stated that there is no other way of coming unto the Father but by him. God directed him to make this bold statement. God sent him, commissioned him, and gave him access to function as the Messiah, His only begotten Son. Jesus Christ was the Word made flesh so that mankind could come to know God (John 1:14 and 18). Jesus Christ also said, “He that hath seen me hath seen the Father” (John 14:9).
Jesus Christ came to declare the way to God, and throughout his earthly ministry he invited people to follow him. We see this in records in the Gospels where he said, “follow me,” “come and see,” and “come after me.” Let’s examine one such record found in Mark 8.
Mark 8:34:
And when he [Jesus] had called the people unto him with his disciples also, he said unto them, Whosoever will come after me, let him deny himself, and take up his cross, and follow me.
Here we not only see Jesus inviting others to follow him, but we see the conditions he set in order to do so. He said, “Let him deny himself, and take up his cross.” What does it mean to “take up his cross”? In a footnote in Jesus Christ Our Passover, by Victor Paul Wierwille, we find this explanation:

The phrase “bear his cross” was a common expression at the time of Jesus for describing one’s taking on the responsibility of doing another’s will, even if it resulted in public humiliation or in giving priority to the master’s will over himself, family, or friends. Similar expressions are also found in Matthew 10:38, 16:24, Mark 8:34, 10:21, and Luke 9:23.

Jesus Christ, as God’s only begotten Son, came to declare the way to God for others and was calling the people to take on the responsibility of doing God’s will. Jesus Christ always did the will of his Father—that was the “meat” that nourished his soul (John 4:34). The Greek word for “follow” in Mark 8:34 means to go with or after one. It’s used especially of soldiers, servants, and pupils; hence, it is to be a follower. In Jesus Christ’s call for a person to “take up his cross, and follow me,” we can clearly see that commitment and self-sacrifice were vital ingredients.
Another great record where Jesus Christ said, “follow me,” is one that occurred early in Jesus Christ’s earthly ministry.…

This is an excerpt from the July/August 2005 issue of The Way Magazine.
Copyright© 2005 by The Way International. All rights reserved.
For more information on subscribing to The Way Magazine, Click Here