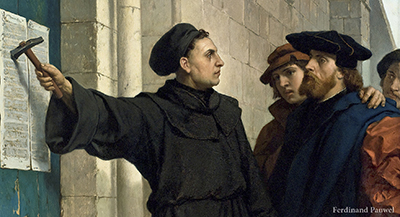 October 31, 2017, marked the 500th anniversary of the day Martin Luther nailed his Ninety-five Theses to the door of Castle Church in Wittenberg, Germany. This bold and courageous act is widely regarded as the beginning of the Protestant Reformation and is still having an impact 500 years later. Luther’s heart and purpose for this single act is expressed in the introductory paragraph of his Ninety-five Theses:
“Out of love for the truth and the desire to bring it to light…”
This truly defines so much of who Martin Luther was and what he stood for in his day and time. He studied the Scriptures diligently because he hungered to understand the truth of God’s Word. Luther also had a passionate desire to speak the truth and bring it to light to reform the Roman church and help the common people with the greatness of God’s Word. Luther’s bold and courageous stand brought spiritual deliverance to thousands upon thousands of people and changed the course of history in Europe. To honor his life and legacy, we will consider how Martin Luther’s great love for the truth through the various stages of his life developed into an unswerving commitment to take a stand on God’s Word. We will also consider how our lives can have a dynamic impact as our love for the truth fuels our bold stand on God’s Word.
Hundreds of years prior to Luther’s posting of his Ninety-five Theses, the groundwork was laid for much-needed spiritual reform. The Roman church had become the dominant religion in Europe during the Middle Ages. By the early thirteenth century, the Roman church had restricted access to Bibles and permission to teach from the Scriptures (written in Latin) only to its priests. The common people were forbidden access to Bibles in their own languages. The church also promoted the sale of “indulgences”—certificates of pardon freeing people from punishment for their sins. In the fourteen hundreds, John Huss, a Bohemian priest from eastern Europe and one of several key predecessors to the Protestant Reformation, preached against the sale of indulgences. He also labored diligently to help the common man gain access to the Bible. John Huss was burned at the stake in 1415 for his actions. He wrote the following in his prison cell while waiting to be executed: “They may kill a goose [the word ‘Huss’ means goose in the Bohemian language] but a hundred years from now a swan will arise which they will not be able to kill.” That swan would be Martin Luther!
On November 10, 1483, Martin Luther was born in Eisleben, Saxony (Germany). Luther’s early religious education (which was truth mixed with tradition and erroneous doctrine) came from his God-fearing, stern, honest, and hard-working parents. He was of peasant stock, raised in poverty and hardship. He observed and learned from his parents’ strength of character as they labored diligently under dire circumstances to provide for their large family. These learned characteristics would serve Luther well during the Reformation years when he boldly spoke God’s Word and made his valiant declaration, “Here I stand.”
At age five, Luther began attending school, where he learned reading, writing, music, and religion. He was taught the Lord’s Prayer, the Apostles’ Creed, and Latin (the language of the church). Luther also learned to sing psalms and hymns and was schooled in the various saints, religious relics, and indulgences.
The popular religion of the day was a negative and fearful experience for Luther. Christian teachings were mixed with superstition. The church taught about and portrayed images of devils and witches tormenting children, grown people, their land, and cattle. Such teachings instilled fear in the minds and hearts of the people. The church and school taught that Christ was a horrible avenger of disobedience rather than a revealer of God’s love, mercy, and grace. From early childhood, Luther would turn pale and become very fearful whenever he heard the name “Christ” mentioned. Luther was also taught to pray to a multitude of saints and to Mary, the mother of Christ.
In 1501, at the age of eighteen, Martin Luther attended college at the University of Erfurt in Erfurt, Germany. The teachings from his professors were again infiltrated with church doctrine. Luther was one of the top students in his class. His classmates described him as the “learned philosopher,” “the musician,” and fun loving. He began every day with prayer, and his motto was “He who prays aright has finished his studies more than half.” Luther never missed class, asked many questions of his teachers, and spent many hours in the library.
It was in the university library that he saw a whole Bible for the first time in his life. The Bible was in Latin, and it was chained to a desk. He was surprised to see that the Bible contained many more records than were being read in the churches. Luther longed to have his own Bible. According to Luther: The Leader, a biography, “he prayed that God in His great mercy would grant him the favor to possess a copy of that wonderful Book.” He was inspired when he read the record about Hannah and Samuel. After reading it, Luther “prayed to God to make him as pious and as useful as was Samuel of old.” It was evident that Luther’s hunger for the truth of God’s Word was growing, as was his desire to serve and speak for the one true God….