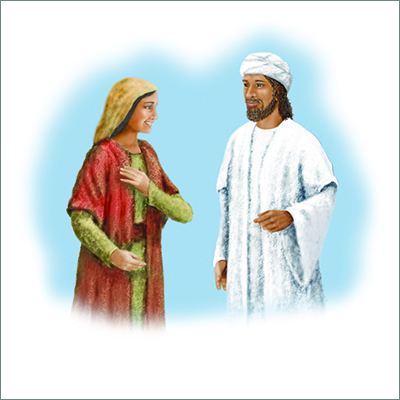 When I first became a part of The Way International, I learned about The Way Corps training, a program designed to develop leaders in our ministry. I knew right away that being a Way Corps minister was something I wanted to do with my life. However, I needed to become rooted and grounded in the principles of God’s Word. I also needed to gain a mature understanding of the requirements of a leader and to grow in my believing that God’s Word is His will.
To build my believing in the Word, I looked at examples of men, women, and young people in the Bible who believed and trusted God’s Word in challenging circumstances. One of the examples that inspired me is that of the young woman Mary. When faced with an opportunity to respond to the will of God, Mary responded with great believing. She was confident that God would fulfill His promise that no word of God was without power.
Luke 1:37:
For with God nothing [not anything spoken] shall be impossible [void of power].
Mary’s example continues to be a witness to me and is encouraging to all those who want to respond positively to God’s Word and will. Let’s investigate the record of Mary in Luke 1, where the angel Gabriel delivered God’s message to her and she responded from the heart with great humility and believing.
For the young woman Mary, the will of God for her life that was spoken by the angel Gabriel was established beyond a shadow of a doubt, so that she could focus her believing on God’s promise.
Luke 1:26 and 27:
And in the sixth month [of Elisabeth’s pregnancy] the angel Gabriel was sent from God unto a city of Galilee, named Nazareth,
To a virgin espoused to a man whose name was Joseph, of the house of David; and the virgin’s name was Mary.
The Word tells us that Mary was “espoused.” In our culture, we might use the word “engaged” to indicate that a commitment had been made. When we investigate the Eastern culture regarding marriage customs, however, we learn that their espousal was even a stronger commitment than we would consider an engagement. Being espoused included a betrothal ceremony. During this solemn ceremony, the families of the espoused couple would gather for a great feast. The groom would give the precious gift of ten pieces of silver to the bride. There would also be a payment, or dowry, made by the groom’s family to the bride’s family to seal the arrangement. The espousal was an actual marriage commitment.
Understanding the significance of their espousal helps us appreciate their commitment. Her decision would change the course of their future together. After their upcoming wedding, Mary and Joseph would begin living together as husband and wife. The angel Gabriel appeared to Mary during the days between the betrothal ceremony and the wedding date.
Verse 28:
And the angel came in unto her, and said, Hail, thou that art highly favoured, the Lord is with thee: blessed art thou among women.
Gabriel greeted Mary with encouraging words. He told her that she was highly favored of God and that she was blessed among women. In Jesus Christ Our Promised Seed Dr. Victor Paul Wierwille wrote, “Of all the women who had ever lived, it would be Mary who would conceive and give birth to mankind’s promised seed. Certainly she received God’s high favor. What a tremendous young woman Mary was.”
Verse 29:
And when she saw him [Gabriel], she was troubled at his saying, and cast in her mind what manner of salutation this should be.
Mary was a young woman. She was a human being, just as we are. She was visited by an angel, a messenger of God. Even though his words to her were positive and encouraging, she was troubled at his saying. The word “troubled” can be understood as meaning greatly agitated or stirred up. She was unsettled by his appearance and his words. As a result, she began to consider, or think over, what the angel had said to her. As the angel continued with his message, God’s will for Mary began to plainly unfold.
Verse 30:
And the angel said unto her, Fear not, Mary: for thou hast found favour with God.
Gabriel encouraged Mary by telling her to have no fear. She was reminded that she had found favor with God. She could control her thinking and not allow fear to stir up her thoughts. God’s message to Mary was one of comfort and encouragement. We need have no fear when carrying out the will of God. This is an important truth to build in our lives.
In verses 31 through 33, we see a great prophecy in the Word of God regarding mankind’s redeemer.
Verses 31-33:
And, behold, thou shalt conceive in thy womb, and bring forth a son, and shalt call his name JESUS.
He shall be great, and shall be called the Son of the Highest: and the Lord God shall give unto him the throne of his father David:
And he shall reign over the house of Jacob for ever; and of his kingdom there shall be no end.
The coming of the Christ was by no means unanticipated, and Mary would have been among those who anticipated his coming….

This is an excerpt from the January/February 2006 issue of The Way Magazine.
Copyright© 2006 by The Way International. All rights reserved.
For more information on subscribing to The Way Magazine, Click Here