Home » Articles » Manners and Customs » Metalworkers in the Bible 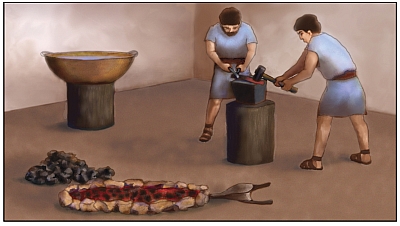 Metalworkers in Bible times held a very important occupation. Their job included digging ore from the ground, refining metal, and working the metal into useful objects such as weapons, tools, cooking utensils, and musical instruments.
Different terms describing metalworkers in the Bible include artificer, smith, coppersmith, craftsman, and silversmith. By going to the Scriptures, we will see the importance of metalworkers and how some in this trade produced their metals for the glory of God, while others marketed their works for evil, idolatrous practices. The first we read of metalworkers is in Genesis.
Genesis 4:21 and 22:
…Jubal: he was the father of all such as handle the harp and organ.
…Tubal-cain, an instructer of every artificer in brass and iron….
Tubal-cain was the half brother of Jubal, “the father of all such as handle the harp and organ.” Since tools would have been needed to construct musical instruments, the smith’s art must have started previous to the making of the instruments, concludes Barbara M. Bowen in Strange Scriptures that Perplex the Western Mind. Archaeologists have brought to light that some of the work of skilled ancient workmen in the mechanical arts is superior to anything the world has produced since.
By the time of Abraham, refining metal was a well-developed skill. The occupation of the smith became a very important trade after the children of Israel took over the Promised Land. The smith helped to make tools and weapons of metal. But in the days of Saul, the Philistines destroyed or removed all the smiths to prevent Israel from making spears and swords.
I Samuel 13:19 and 20:
Now there was no smith found throughout all the land of Israel: for the Philistines said, Lest the Hebrews make them swords or spears:
But all the Israelites went down to the Philistines, to sharpen every man his share, and his coulter, and his axe, and his mattock.
Until their power was broken by Saul and David, the Philistines even required the Hebrews to bring them any tools that needed to be sharpened. Later, as Nelson’s Illustrated Bible Dictionary tells us, “Solomon brought Israel into a high stage of metalworking by importing experts from other more advanced nations.”
I Kings 7:13 and 14:
And king Solomon sent and fetched Hiram out of Tyre.
He was a widow’s son of the tribe of Naphtali, and his father was a man of Tyre, a worker in brass: and he was filled with wisdom, and understanding, and cunning to work all works in brass. And he came to king Solomon, and wrought all his work.
Many of the items metalworkers produced for the Temple were made of copper mixed with tin to make them stronger, and this metal is called bronze. Much of the Old Testament uses the word “brass” for this copper alloy.
I Kings 7:45:
And the pots, and the shovels, and the basons: and all these vessels, which Hiram made to king Solomon for the house of the Lord, were of bright brass.
God’s enemies saw the importance of the smith’s trade as well. Nebuchadnezzar carried out all the treasures of the house of the Lord and carried away smiths into Babylon.
II Kings 24:13 and 14:
And he [Nebuchadnezzar] carried out thence all the treasures of the house of the Lord, and the treasures of the king’s house, and cut in pieces all the vessels of gold which Solomon king of Israel had made in the temple of the Lord, as the Lord had said.
And he carried away all Jerusalem, and all the princes, and all the mighty men of valour, even ten thousand captives, and all the craftsmen and smiths: none remained, save the poorest sort of the people of the land.
Years later, Nehemiah speaks of the rebuilding of the walls of Jerusalem. Among those rebuilding the walls were metalworkers of gold.
Nehemiah 3:8,31,32:
Next unto him repaired Uzziel the son of Harhaiah, of the goldsmiths. Next unto him also repaired Hananiah the son of one of the apothecaries, and they fortified Jerusalem unto the broad wall.
After him repaired Malchiah the goldsmith’s son unto the place of the Nethinims, and of the merchants, over against the gate Miphkad, and to the going up of the corner.
And between the going up of the corner unto the sheep gate repaired the goldsmiths and the merchants.
In the New Testament, we find two places where metalworkers were a hindrance to the move of God’s Word. Paul withstood the evil in both situations, giving out the Word of God.
Acts 19:24:
For a certain man named Demetrius, a silversmith, which made silver shrines for Diana, brought no small gain unto the craftsmen.
The silversmiths of Ephesus were making statues of Diana. The preaching of God’s Word threatened their lucrative business. They were very upset with Paul and his followers.
The other situation involving a metalworker who obstructed Paul is mentioned in II Timothy concerning Alexander the coppersmith. The name “Alexander” means “the helper of men.” However, this Alexander was a hindrance to Paul and his teaching of the Word.
II Timothy 4:14 and 15:
Alexander the coppersmith did me much evil: the Lord reward him according to his works:
Of whom be thou ware also; for he hath greatly withstood our words.
Paul and his followers withstood both Demetrius and Alexander. The people around were antagonistic toward Paul, but he stood his ground and went on to give the Word of God to those who wanted to hear.
Although unbelieving men worked evil through their craft, we have seen the importance of believing metalworkers who utilized their skills to reflect the beauty of the Lord and make a godly impact in their day.
Psalms 90:17:
And let the beauty of the Lord our God be upon us: and establish thou the work of our hands upon us; yea, the work of our hands establish thou it.
Today, as followers of the Lord Jesus Christ, we also endeavor to live so that the work of our hands glorifies our heavenly Father.

This is a reprint from the November/December 2005 issue of The Way Magazine.
Copyright© 2005 by The Way International. All rights reserved.
For more information on subscribing to The Way Magazine, Click Here