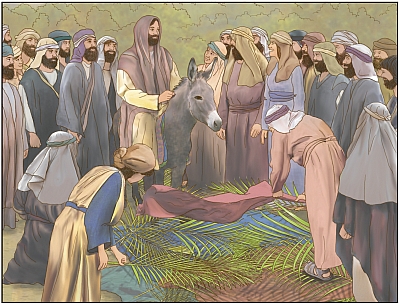 Manners and customs can help us understand the use of the palm branches in the Scripture, as well as the garments spread, or strawed, in the way.
John 12:12 and 13:
On the next day much people that were come to the feast, when they heard that Jesus was coming to Jerusalem,
Took branches of palm trees, and went forth to meet him, and cried, Hosanna: Blessed is the King of Israel that cometh in the name of the Lord.
Mark 11:8 and 9:
And many spread their garments in the way: and others cut down branches off the trees, and strawed them in the way.
And they that went before, and they that followed, cried, saying, Hosanna; Blessed is he that cometh in the name of the Lord.
The palm branches were used at the time of festivity, especially during the religious feasts. They were a sign of joy and triumph. Also, to show honor and respect, the people laid their garments (usually the mantle) down on the path for a king as he passed by. As all of this was going on, there were shouts of acclamation showing joy and triumph. Jesus’ entry into Jerusalem at Passover time will give us a good picture of these two customs.
At that time faithful Judeans in the area around Jerusalem and many on their way from far countries were heading to Jerusalem for the Feast of the Passover. Even some Gentiles and Judeans who were not usually seen at religious services were anxious to see the crowds and excitement here.
John 12:20:
And there were certain Greeks [Gentiles] among them that came up to worship at the feast.
The word had reached many people about Jesus raising Lazarus from the dead. So they made an extra effort to go to the Passover that year.
John 12:9:
Much people of the Jews [Judeans] therefore knew that he was there: and they came not for Jesus’ sake only, but that they might see Lazarus also, whom he had raised from the dead.
Before Jesus left the area of Bethany and Bethphage, many people had already arrived to go with Jesus and his disciples to Jerusalem.
Jesus sent two of his disciples to find the colt that he would later ride into Jerusalem. By custom, this would be one of the Temple animals stabled on the outskirts of town that could be used by any holy man in service to the Lord.
Mark 11:1,4,7:
And when they came nigh to Jerusalem, unto Bethphage and Bethany, at the mount of Olives, he sendeth forth two of his disciples,
And they went their way, and found the colt [ass’s colt] tied by the door without in a place where two ways met; and they loose him.
And they brought the colt to Jesus, and cast their garments [mantles] on him [the colt]; and he [Jesus] sat upon him.
Jesus was going to ride into Jerusalem in judgment. In Eastern culture, riding an ass’s colt into town was a sign that a ruler was coming in judgment.
As they passed the Mount of Olives, the people cut branches from the palm trees to wave and then lay them on the path where Jesus would be riding the ass’s colt (Mark 11:8). The people placed the palm branches and some of their mantles on the path where Jesus would ride. The spreading of palm branches and garments were longtime customs. Dignitaries were welcomed this way to show honor and respect.
The impact of Jesus’ welcome by the people as they spread their mantles and the palm branches greatly disturbed the religious leaders, the Pharisees.
John 12:19 [The Amplified Bible]:
Then the Pharisees said among themselves, You see how futile your efforts are and how you accomplish nothing. See! The whole world is running after Him!
Dr. Victor Paul Wierwille wrote in Jesus Christ Our Passover regarding the significance of Jesus Christ’s entry into Jerusalem in judgment:

…The excitement in the crowd was electrifying. The common people really loved Jesus.

…Everyone except these Pharisees seemed enthralled with this great miracle worker.

…The man from Galilee had boldly entered Jerusalem and the Temple in judgment despite threats of death from the religious leaders. With this day the most unusual and tumultuous week in history began to unfold.

The arrival in Jerusalem of Jesus Christ—God’s only begotten Son, the promised Messiah—brought great joy and excitement among the people. They showed their joy and respect as they laid palm branches and mantles along his path. Jesus Christ is still the cause for great joy and honor in our lives today as we claim the abundant life he made available to us and share it with others.

This is a reprint from the July/August 2010 issue of The Way Magazine.
Copyright© 2010 by The Way International. All rights reserved.
For more information on subscribing to The Way Magazine, Click Here