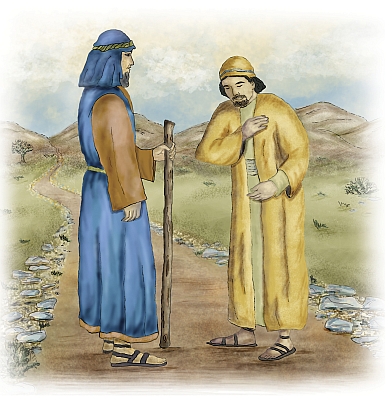 We understand God’s Word much better when we know something of the manners and customs used in Bible times. What the Bible calls a “salute” has been a puzzle to some believers. It is not the military salute that is common today. We have many types of salutes and greetings in the Word of God.
One modern English dictionary gives the primary definition of “salute” as a salutation, that is, any form of greeting, or the opening words of a letter. It is also called a compliment, a show of respect, or a sign of welcome. In the Bible, an Eastern salute included a blessing or wishing a person peace. This could be either spoken or written in letters.
There are several types of salutations mentioned in the Bible. One salute was used when visiting a home. Today, we greet visitors at the door, and they say, “Hello.” A similar custom was common in Bible times.
Judges 18:15:
And they turned thitherward, and came to the house of the young man the Levite, even unto the house of Micah, and saluted him.
Matthew 10:12:
And when ye come into an house, salute it.
Luke 1:39-41:
And Mary arose in those days, and went into the hill country with haste, into a city of Juda;
And entered into the house of Zacharias, and saluted Elisabeth.
And it came to pass, that, when Elisabeth heard the salutation of Mary, the babe leaped in her womb; and Elisabeth was filled with the Holy Ghost [holy spirit].
When visiting her cousin, Elisabeth, Mary gave an Eastern salute. Then Elisabeth immediately saluted Mary with words of great blessing.
Luke 1:42-45:
And she spake out with a loud voice, and said, Blessed art thou among women, and blessed is the fruit of thy womb.
And whence is this to me, that the mother of my Lord should come to me?
For, lo, as soon as the voice of thy salutation sounded in mine ears, the babe leaped in my womb for joy.
And blessed is she that believed: for there shall be a performance of those things which were told her from the Lord.
At times, angels saluted the people they delivered a message to. Mary had received such an Eastern salute shortly before she visited Elisabeth. It came from an angel sent by God.
Luke 1:26-28:
And in the sixth month the angel Gabriel was sent from God unto a city of Galilee, named Nazareth,
To a virgin espoused to a man whose name was Joseph, of the house of David; and the virgin’s name was Mary.
And the angel came in unto her, and said, Hail, thou that art highly favoured, the Lord is with thee: blessed art thou among women.
This was a very special salutation, for the angel told Mary that she was highly favored of God and blessed among women. Mary did not understand the angel’s salute and began to think over what it could mean. God had Gabriel explain to Mary the great favor and blessing of being chosen to bear the Messiah.
Luke 1:29 and 30:
And [But] when she saw him, she was troubled at his saying, and cast in her mind what manner of salutation this should be.
And the angel said unto her, Fear not, Mary: for thou hast found favour with God.
In the Old Testament we see salutes given to men of importance such as kings. King David and Toi, the king of Hamath, fought against a common enemy. In thanksgiving, Toi sent his own son to salute and bless David, a fellow king.
II Samuel 8:9 and 10:
When Toi king of Hamath heard that David had smitten all the host of Hadadezer,
Then Toi sent Joram his son unto king David, to salute him, and to bless him, because he had fought against Hadadezer, and smitten him: for Hadadezer had wars with Toi….
Even kings saluted holy men, because they were considered to be God’s representatives. Saul, Israel’s first king, showed this Eastern respect by saluting the Prophet Samuel.
I Samuel 13:10:
And it came to pass, that as soon as he had made an end of offering the burnt offering, behold, Samuel came; and Saul went out to meet him, that he might salute him.
In New Testament times, Jesus saw how the religious leaders loved the ceremonious salutations they received in public places. Jesus warned against such hypocrisy.
Luke 11:43:
Woe unto you, Pharisees! for ye love the uppermost seats in the synagogues, and greetings [salutations] in the markets.
Mark 12:38:
And he said unto them [his disciples] in his doctrine, Beware of the scribes, which love to go in long clothing, and love salutations in the marketplaces.
According to Bishop K. C. Pillai, a common Eastern salute is to wish another peace. “In the East, the people will salute each other on the street saying, ‘Peace be unto you.’ ” They will take the time to greet everyone in this manner. But Jesus saluted others by offering another kind of peace. This true peace would comfort their hearts….

This is an excerpt from the May/June 2007 issue of The Way Magazine.
Copyright© 2007 by The Way International. All rights reserved.
For more information on subscribing to The Way Magazine, Click Here