Home » Articles » Manners and Customs » Sealed with a Signet 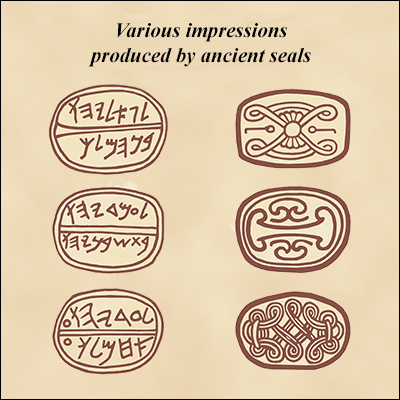 In the Eastern lands, a signet was an object of great meaning and importance. Every household had a signet or seal, which was engraved with distinctive markings. A person in authority used the signet or seal to make an impression in wax or clay upon letters, documents, and other objects to be sealed.
The signet was often made in the form of a ring, which the owner could wear at all times to have it at hand when needed. Occasionally the seal was perforated and hung from a chain or simple cord around the neck. In this way, it could easily be hidden under the tunic or robe so that no one could grab it and take it away. Every person of any standing had a seal.
Joseph was given the ring of authority, the signet ring, which gave him enormous power in the land of Egypt—the same authority as Pharaoh’s written signature.
Genesis 41:42:
And Pharaoh took off his ring from his hand, and put it upon Joseph’s hand, and arrayed him in vestures of fine linen, and put a gold chain about his neck.
In Old Testament Light, George M. Lamsa states that kings, princes, governors, and noblemen wore rings as a symbol of authority, wealth, and power.
The signet was used wrongfully at times. Ahab, the king of Israel, could not persuade Naboth to sell his vineyard to him. Jezebel, the wife of Ahab, wanted her husband to have the vineyard. She had access to the signet that belonged to King Ahab, and she used it to authorize documents to falsely show the king’s ownership of the land.
I Kings 21:8:
So she wrote letters in Ahab’s name, and sealed them with his seal, and sent the letters unto the elders and to the nobles that were in his city, dwelling with Naboth.
The documents would not have been legal without the seal, so we can see how important a signet was and how much damage it could do when it was in the wrong hands.
In the Book of Esther, we read about another wrong use of authority and how it was made right.
Esther 3:10:
And the king took his ring from his hand, and gave it unto Haman….
Haman, a leader in King Ahasuerus’s court, acquired the use of the king’s ring. Haman had the right in his position to use the signet ring, but he used it for an evil purpose. He sent a letter to all the people of the land to get rid of all the Judeans. King Ahasuerus was not aware at the time that his wife, Queen Esther, was a Judean. Because Haman hated Esther’s cousin, Mordecai, he wanted to get rid of Mordecai, and he tried to use the king’s authority to do it.
Esther 3:12:
…in the name of king Ahasuerus was it written, and sealed with the king’s ring.
Esther presented her case to the king, informing him of her ancestry. She showed the king what Haman was doing with his signet ring.
Esther 8:2 and 8:
And the king took off his ring, which he had taken from Haman, and gave it unto Mordecai….
Write…in the king’s name, and seal it with the king’s ring: for the writing which is written in the king’s name, and sealed with the king’s ring, may no man reverse.
When Haman used the signet ring, the letter he wrote meant death to the Judeans. But, when Mordecai used the ring, the new letter he wrote gave the Judeans life and hope.
The Book of Daniel also records an incident about sealing with the signet.
Daniel 6:17:
And a stone was brought, and laid upon the mouth of the den; and the king sealed it with his own signet, and with the signet of his lords; that the purpose might not be changed concerning Daniel.
Daniel had men in the king’s council who did not like him and who tricked the king into signing a decree that would hurt Daniel. These men knew that Daniel prayed three times a day to his God, so they made a decree to honor the king that prohibited anyone from asking anything of any god or man except the king for thirty days. When Daniel continued to pray to God, he found himself in the lions’ den with the king’s seal on the stone above his head. God honored Daniel’s prayer and closed the lions’ mouths. When the king came the next morning, he called to Daniel to see if his God was strong enough to save him. Daniel was saved, and the king honored the God of Daniel.
In Luke 15, we read about a younger son’s return home from a time of riotous living. His forgiving father welcomed him as if he had been lost. He had been lost, in a sense, because they did not expect to see him again. The father had a feast prepared for him, and there was even a fatted calf killed for the celebration.
Luke 15:22:
But the father said to his servants, Bring forth the best robe, and put it on him; and put a ring on his hand, and shoes on his feet.
They brought out a fine robe for him to wear, shoes for his feet, and a ring to wear. This ring showed authority in the household and was given to the son. However, this ring was not necessarily the signet ring needed to seal legal documents and important letters….

This is an excerpt from the July/August 2002 issue of The Way Magazine.
Copyright© 2002 by The Way International. All rights reserved.
For more information on subscribing to The Way Magazine, Click Here