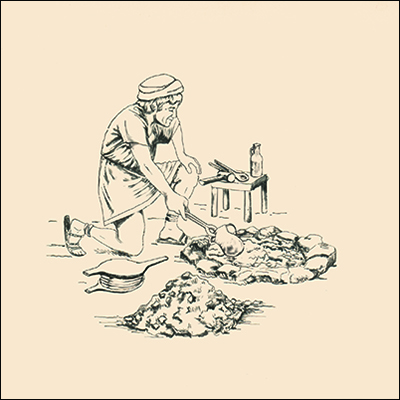 In Bible times wealth was represented by silver and gold and physical belongings or material wealth, such as cattle, horses, and sheep. Today most people still think of wealth in terms of money or physical belongings.
In Palestine, where the Israelites lived, there was very little mining of precious metals, as we see from Corswant’s book, A Dictionary of Life in Bible Times.

Palestine properly so-called is not a mining country, and it depended upon other lands for metals. But mines on the periphery of the land were already being exploited, in Lebanon, the land of Moab, and south of the Dead Sea.

The Israelites probably learned the craft of making objects of metal, silver, gold, and copper from their neighbors, the Philistines, or they possibly learned something about it while in Egypt. As early as 3000 B.C. cups and goblets made of silver and gold could be found throughout many Near Eastern countries.
Silver and gold are mentioned often in God’s Word, sometimes in an incident and at other times as a figure of speech. King Solomon made silver so abundant that it became a common item in his time, but this did not mean everyone had an abundance of wealth.
II Chronicles 9:27 [The Amplified Bible]:
The king [Solomon] made silver in Jerusalem as common as stones, and cedar wood as plentiful as sycamore trees in the lowlands.
Silver was used as a medium of exchange, and later it was mixed with another metal to make it of lesser value. The following verse tells us God’s words are pure words and compares them to silver which has been purified.
Psalms 12:6:
The words of the Lord are pure words: as silver tried in a furnace of earth, purified seven times.
The word “tried” means refined or pure. God’s Word was compared to silver because it was something people understood and used.
There was a time when God’s Word had been lost to Israel, and Israel had turned away from God. Because of evil kings and much war, the Scriptures were not readily accessible. Can you imagine what it would be like to not have God’s Word to read at any place in your country? The book of the law was found when cleaning and repairing the Temple.
II Kings 22:8 and 10:
And Hilkiah the high priest said unto Shaphan the scribe, I have found the book of the law in the house of the Lord….
And Shaphan the scribe shewed the king [Josiah], saying, Hilkiah the priest hath delivered me a book. And Shaphan read it before the king.
II Kings 23:2:
And the king [Josiah] went up into the house of the Lord, and all the men of Judah and all the inhabitants of Jerusalem with him, and the priests, and the prophets, and all the people, both small and great: and he read in their ears all the words of the book of the covenant which was found in the house of the Lord.
Another record mentions that the Word was considered “precious.”
I Samuel 3:1-4:
…And the word of the Lord was precious in those days; there was no open vision.
…when Eli was laid down in his place, and his eyes began to wax dim, that he could not see;
And ere the lamp of God went out in the temple of the Lord….
That the Lord called Samuel: and he answered, Here am I.
Samuel took God’s Word and gave it to the people. The Word was again brought back so that the people could hear it.
God’s Word is so important that He has exalted it above His name.
Psalms 138:2:
…for thou hast magnified thy word above all thy name.
We need to study and meditate on God’s Word because it is precise and written with order and gives us meaning for our lives. God has not only promised to supply our need, but to supply it more than abundantly when we believe in Him.
Philippians 4:19:
But my God shall supply all your need according to his riches in glory by Christ Jesus.
In the Old Testament we read about….

This is an excerpt from the March/April 2001 issue of The Way Magazine.
Copyright© 2001 by The Way International. All rights reserved.
For more information on subscribing to The Way Magazine, Click Here