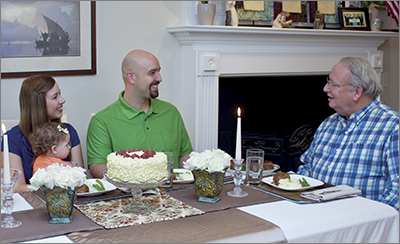 By their example, certain people have made a lasting impression on my life. A disciple sat with me through my first Foundational Class and encouraged me to begin living a life filled with abundance and power. It was his patience and encouragement that prepared me to receive the Word of God in that class. My first household fellowship coordinator taught me how to lead a fellowship meeting. She considered how I would best learn and helped me to be successful. While I was on Staff at The Way International, my supervisor gave me opportunities to serve that helped me reach beyond my own abilities. His encouragement and care inspired me to make a commitment to greater serve God and the household of believers.
I am thankful for these individuals. Their example of living the Word sounds out today, inspiring me to give to others as others have given to me.
In the first century, Paul, Silas, Timothy, and the church in Thessalonica sounded out by their example. Their Word-filled communication and their loving care for others provide us with a pattern that can be imitated in our homes, our fellowships, and our communities. Let’s look at the Book of I Thessalonians to see these two inspiring qualities in action. Like the first-century believers, we can sound out by our example—in our Word-filled communication and in our loving care for others.
Paul, his companions, and the believers of Thessalonica abounded in their Word-filled communication. Even though they were consistently faced with opposition, Paul, Silas, and Timothy continued to reach out with the Word of God.
I Thessalonians 2:1-4:
For yourselves, brethren, know our entrance in unto you, that it was not in vain:
But even after that we had suffered before, and were shamefully entreated, as ye know, at Philippi, we were bold in our God to speak unto you the gospel of God with much contention.
For our exhortation was not of deceit, nor of uncleanness, nor in guile:
But as we were allowed of God to be put in trust with the gospel, even so we speak; not as pleasing men, but God, which trieth our hearts.
No matter the circumstances that Paul and his companions faced, they consistently shared and lived the Word they believed. They knew what a privilege it was to be “allowed of God to be put in trust with the gospel.” With boldness and love, they proclaimed God’s Word, not to be men pleasers but rather to please their heavenly Father. The Thessalonian believers learned from their example, and so can we. We hold forth the Word because God has put it in our trust and because that is our response to His love. Our success in holding forth the Word is not based on a person’s response. When we are abundant in our Word-filled communication, it makes a spiritual impact every time we speak.
In Acts 16 we can see in greater detail what Paul was referring to in I Thessalonians 2:2. Look at how Paul and Silas were treated at Philippi.
Acts 16:22-25:
And the multitude rose up together against them: and the magistrates rent off their clothes, and commanded to beat them.
And when they had laid many stripes upon them, they cast them into prison, charging the jailor to keep them safely:
Who, having received such a charge, thrust them into the inner prison, and made their feet fast in the stocks.
And at midnight Paul and Silas prayed, and sang praises unto God: and the prisoners heard them.
Paul and Silas were wrongfully beaten, thrown into the inner prison, and restrained in stocks. But rising above the circumstances, Paul and Silas prayed and sang praises to God. Their example of Word-filled communication sounded out, even in prison, as the other prisoners heard them. Acts 16:26-40 shows the great deliverance that came about as they stood boldly on God’s Word. The comforting, encouraging, and edifying promises of God will always dispel darkness. When we face challenges, it is how we respond with God’s Word that enables us to prevail.
The Thessalonian church continued in this pattern of life by sounding out with the Word of the Lord while they were confronted with challenging situations. The believers followed the example of Paul, Silas, and Timothy to the end that word of their believing life-style spread to other nations.
I Thessalonians 1:6-8:
And ye became followers of us, and of the Lord, having received the word in much affliction, with joy of the Holy Ghost [holy spirit]:
So that ye were ensamples to all that believe in Macedonia and Achaia.
For from you sounded out the word of the Lord not only in Macedonia and Achaia, but also in every place your faith [believing] to God-ward is spread abroad; so that we need not to speak any thing.
The Thessalonians received and acted on the Word that Paul, Silas, and Timothy lived and shared. As they acted on these truths and imitated their leadership, they became examples also. The Thessalonian believers were making such an impact that in some of Paul’s travels he didn’t even have to say a word about their believing because people had already heard of them. By revelation, Paul expressed his thankfulness for these dynamic believers.
I Thessalonians 2:13:
For this cause also thank we God without ceasing, because, when ye received the word of God which ye heard of us, ye received it not as the word of men, but as it is in truth, the word of God, which effectually worketh also in you that believe.
Paul praised the believers for the way they responded to God’s Word. These Thessalonians not only received the Word that Paul and his friends shared, but they also manifested power as they walked out with believing. Paul was thankful and encouraged because these believers were living the Word that was being taught….

This is an excerpt from the March/April 2012 issue of The Way Magazine.
Copyright© 2012 by The Way International. All rights reserved.
For more information on subscribing to The Way Magazine, Click Here