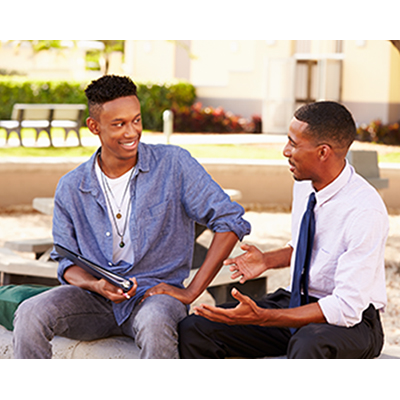 One of my favorite songs that Way Productions sings is “Speak the Word.” I enjoy the Caribbean and reggae beat, but most of all I love the lyrics because they remind and inspire me to speak God’s Word. Here are some of the lyrics to the song:

As sons of God, we can make a difference in the world and have the greatest impact by speaking God’s Word consistently in our daily lives. To speak consistently, it’s helpful to know why we speak God’s Word, what our part is and what God’s part is in speaking the Word, and who we speak God’s Word to.
My wife and I will always remember when our daughter spoke her first word. We looked at each other with big smiles. When we take the believing action to speak God’s Word, it is pleasing to God—it puts a big smile on His face. That’s one of the major reasons we speak God’s Word.
I Thessalonians 2:4:
But as we were allowed of God to be put in trust with the gospel, even so we speak; not as pleasing men, but God, which trieth our hearts.
The spoken Word may or may not be pleasing to men, but it is always pleasing to God. We have been given the awesome privilege to speak the Word of Life and to know we are pleasing our Father. How thankful we are to be put in trust with the greatness of God’s Word.
Another reason for and benefit of speaking the Word is that we can make a difference in the world. We have the great privilege to help others with God’s Word. This Word of Life shows the way to the more abundant life. As we speak it, we are making a difference, and we are giving others the privilege to enjoy the greatness of God’s Word that we enjoy. Someone took the time to speak to us; now we make a difference and help others with God’s Word. We see a wonderful example of this in the Book of Acts when Paul and Silas spoke the Word to the jailer.
Acts 16:25-34:
And at midnight Paul and Silas prayed, and sang praises unto God: and the prisoners heard them.
And suddenly there was a great earthquake, so that the foundations of the prison were shaken: and immediately all the doors were opened, and every one’s bands were loosed.
And the keeper of the prison awaking out of his sleep, and seeing the prison doors open, he drew out his sword, and would have killed himself, supposing that the prisoners had been fled.
But Paul cried with a loud voice, saying, Do thyself no harm: for we are all here.
Then he called for a light, and sprang in, and came trembling, and fell down before Paul and Silas,
And brought them out, and said, Sirs, what must I do to be saved?
And they said, Believe on the Lord Jesus Christ, and thou shalt be saved, and thy house.
And they spake unto him the word of the Lord, and to all that were in his house.
And he took them the same hour of the night, and washed their stripes; and was baptized [born again], he and all his, straightway.
And when he had brought them into his house, he set meat before them, and rejoiced, believing in God with all his house.
What a difference Paul and Silas made by speaking the Word to the jailer and his household. They received the Word of Life that gave them salvation and wholeness. The impact of the spoken Word was immediate and eternal. Paul made a difference and helped others by speaking the Word—and we can do the same.
I had the privilege to speak the Word to a co-worker and lead him into speaking in tongues. Though he was born again, he wanted a better understanding of holy spirit and how to manifest it. Over the next few weeks I showed him from the Word and our ministry publications what God says about manifesting the power of God by way of speaking in tongues. Then my co-worker was able to speak in tongues for the very first time. Tears came to his eyes because he knew he was manifesting the power of God. And I went home that day thankful to God for the privilege to speak His Word, knowing that I had made a difference and was able to help someone with God’s Word….

This is an excerpt from the July/August 2010 issue of The Way Magazine.
Copyright© 2010 by The Way International. All rights reserved.
For more information on subscribing to The Way Magazine, Click Here