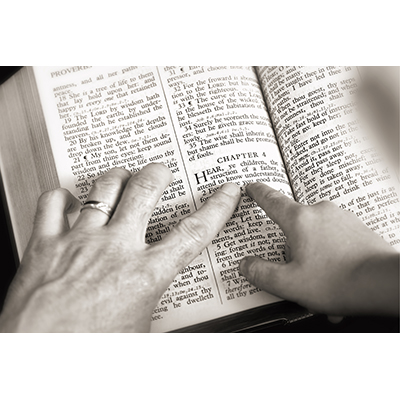 My appreciation for having a knowledge of the truth grew exponentially when I considered the responsibility of a newborn son. Witnessing his first breath was one of the most awe-inspiring experiences of my life! Much preparation and believing led my wife and me to that wonderful event where we received a magnificent blessing from our heavenly Father—a healthy baby boy.
At the same time that we were elated to have a child, we were also faced with the new responsibility of bringing him up in the nurture and admonition of the Lord. As we adjusted to this transition in our lives, we soon saw that there are many records in God’s Word to look to for help in learning how to take on this momentous task and succeed. There are also examples in the household of The Way Ministry that help us.
Each generation of believers has the privilege of not only coming to an accurate knowledge of the truth, but also making it known to the generations following. The Founding President of The Way International, Dr. Victor Paul Wierwille, made mention of the value of passing on the truth of God’s Word from one generation to the next: “Sharing the knowledge of God’s Word from generation to generation—that’s the only way the Word remains alive and vigorous.”
In this article we will see God’s desire for one generation to teach His Word to following generations. We will also consider how we can perform this ourselves. Let’s start in the Old Testament.
God honored Abraham because He knew that Abraham would teach his children the Word, as we see in Genesis 18.
Genesis 18:19:
For I know him, that he will command his children and his household after him, and they shall keep the way of the Lord, to do justice and judgment; that the Lord may bring upon Abraham that which he hath spoken of him.
Abraham is a great example to us due to his willingness and commitment to teach his children the way of the Lord.
After Abraham’s day and time, Moses taught the children of Israel that they were to teach God’s statutes and judgments to succeeding generations.
Deuteronomy 4:9 and 10:
Only take heed to thyself, and keep thy soul diligently, lest thou forget the things which thine eyes have seen, and lest they depart from thy heart all the days of thy life: but teach them thy sons, and thy sons’ sons;
Specially the day that thou stoodest before the Lord thy God in Horeb, when the Lord said unto me, Gather me the people together, and I will make them hear my words, that they may learn to fear [respect] me all the days that they shall live upon the earth, and that they may teach their children.
We see from this account that God wanted His people to diligently take heed to how they were conducting their lives. He warned them about the possibility of forgetting the things they had seen that were evidence of His blessings upon them.
God manifested His power to Israel in many ways during the time of Moses’ leadership. He protected them from the plagues that tormented the Egyptians, He led them out from the bondage they were under as slaves, He parted the Red Sea so that they could escape, and He also led them with a cloud by day and fire by night in their journeys through the wilderness as they made their way to the Promised Land. As the children of Israel obeyed God’s guidance to teach their sons and their sons’ sons, this helped them to avoid forgetting the blessings they had seen God bring to pass for them.
God has done much for us also in our day and time. He has made known the accuracy of His Word in great depth. Teaching our children and our children’s children helps us to remember the blessings of God upon our lives.
My wife and I had the privilege of having our son attend Children’s Fellowship with children his own age at The Way International Headquarters while we worked there on Staff. It blessed us abundantly to start instructing him from an early age to sit obediently while singing Biblical children’s songs and while hearing the Word of God taught at his age level.
When we took a new Way Corps assignment to coordinate a Branch on the field, our approach to teaching our son had to change a little because mainly adults attended fellowships in our Branch. After talking with our leadership, we decided to include our son in our household fellowships. Slowly he grew into it, and we could see the profit. He was getting blessed by seeing believers of all ages, and he was blessing them! We saw steady improvement in his attentiveness.
As we teach God’s Word to succeeding generations of believers, it is helpful to keep in mind that God’s perspective is eternal. He sees beyond our present lifetime into the wonderful future that He has prepared for us through His Son’s accomplishments as our savior. It is vitally important for us to continue to make this knowledge available to our young people. God’s passionate desire is for the truth of His Word to be declared from generation to generation….

This is an excerpt from the July/August 2004 issue of The Way Magazine.
Copyright© 2004 by The Way International. All rights reserved.
For more information on subscribing to The Way Magazine, Click Here