Home » Articles » Walking in Fellowship » The Body of Christ: A Team Built for Victorious Living 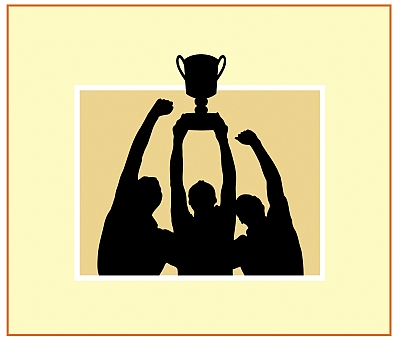 What does a committed, passionate group of people look like? How do they act? What do they do? Consider for a moment the 2008 National Basketball Association (NBA) champions in the United States, the Boston Celtics. This team was led by three outstanding stars—the “Big Three,” as some referred to them—who first became Celtic teammates that 2007–2008 basketball season. Before this time, each of these three had outstanding personal accomplishments and fame, yet none of them had experienced winning an NBA team championship. Additionally, the last time the Boston Celtics’ team had won an NBA championship title was in 1986—it had been twenty-two years.
So what made the difference for these three players and the Boston Celtics this season?
The Boston Celtics had sought to assemble a team that not only had the right mixture of talent, but also, and more importantly, had an attitude of winning and selflessness. This team became known for each player being committed to performing his role at his greatest potential and to working as a team. Speaking of the Celtics’ “Big Three,” one sportswriter noted that “while the spotlight shined on the All-Star trio during the entire campaign, they always made their teammates feel like equals….[They] have already shown in their careers that they can be unselfish. They can also coexist because their respective games complement each other.”
That year, those players gained a reputation for being part of a great team. Today, we as born-again believers can enjoy being part of the greatest team ever assembled, the Body of Christ. God has placed us in the Body—on the team—as it has pleased Him. We each have a spot on the team and a role to play. I Corinthians 12:27 declares that we are “members in particular.”
Like any committed team, we embrace working as a team, and we each do our part to carry out the instruction given to help us be our best. As a result, not only do we personally experience the sweet joys of victorious Christian living, but we attract others as the Lord adds to the Church daily!
The Church of Grace that began on the day of Pentecost set the pattern for successful Christian living.
Acts 2:42:
And they continued stedfastly in the apostles’ doctrine and fellowship, and in breaking of bread, and in prayers.
Who are “they”? “They” refers to the “about three thousand souls” who believed, were born again, and joined the apostles in that first-century fellowship. They witnessed the outpouring of God’s gift of holy spirit, heard Peter’s bold declaration of the promises of God, and accepted his invitation to “repent, and be baptized [born again]…in the name of Jesus Christ for the remission of sins.” But they didn’t stop at repentance: they then “continued stedfastly.”
The phrase “continued stedfastly” comes from one Greek word, proskartereō, meaning to persist; to be intently engaged in; to attend constantly and persevere with unrelenting continuance. In The Rise and Expansion of the Christian Church in the First Century, we read, “This tremendous verb form ‘continued stedfastly’ states the required pattern of faithful believing action necessary to abundantly carry out the apostles’ doctrine, fellowship, breaking of bread, and prayers.” There was necessary faithful action taken that yielded consistent results in the believers’ lives. Let’s take a look at what they continued in unrelentingly.
The first-century believers were persistent and unrelenting in following the apostles’ doctrine. As defined in the foundational class on The Way of Abundance and Power, “doctrine” is simply “how to believe rightly.” The believers persisted in the words spoken—they were like-minded with the apostles. A result was the demonstration of power exhibited by the apostles.
You may have heard the expression, “We’ve got to get on the same page.” To be on the same page means that everyone involved in a task or project understands and is willing to follow a certain plan or set of standards laid out and do his part to carry it out. Here’s an example. I once managed a sales team in New York City that was made up of individuals from different regions of New York, other states, and also from Africa, Puerto Rico, China, and Italy. When I was selected to manage this team, it was thirty-third out of thirty-five sales teams in the country. Within a nine-month period, we had become the third most successful team in the company. What made the difference?
Early on, I set a standard for the team in terms of work ethic expected, daily responsibilities, support that would be provided, and the rewards for success. With everyone on the same page, we had a plan for competing successfully, which we carried out, and we were rewarded handsomely. We persisted in a “right believing” standard. Likewise, the first-century believers continued steadfastly in the standard set by the apostles’ doctrine….

This is an excerpt from the September/October 2009 issue of The Way Magazine.
Copyright© 2009 by The Way International. All rights reserved.
For more information on subscribing to The Way Magazine, Click Here