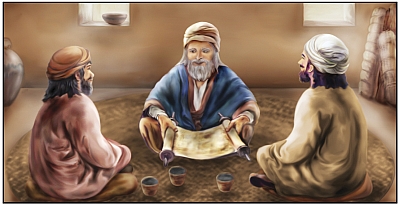 In the East when two parties were not able to work out their differences, they may have sought out a daysman.
Job 9:32 and 33:
For he [God] is not a man, as I am, that I should answer him, and we should come together in judgment.
Neither is there any daysman betwixt us, that might lay his hand upon us both.
The word “daysman” comes from a Hebrew word which means “to set right.” The daysman was “betwixt” two parties and would lay his hands upon them both. He was the go-between to settle their differences. Job wanted things to be set right between him and God. He needed a go-between to help them “come together in judgment.”
Since the word “daysman” occurs only one time in the King James Version, we can look at other books about manners and customs to help us understand what it means. The Zondervan Pictorial Bible Dictionary says the daysman was an umpire, mediator, or arbitrator who set a “day” when the disputing parties could meet. He listened to both parties and then put his hands on their heads. This showed that he had the authority and desire to make an unbiased decision.
Bishop K. C. Pillai lived in India when this custom was still practiced. In Light through an Eastern Window, Bishop Pillai tells how the daysman rose up from among the people because of his wisdom. A daysman had to know the Scriptures to make right decisions.
Easterners liked going to the daysman to settle disputes out of court. Even if they were called to see a judge, they would try to quickly agree along the way and avoid a trial or punishment.
Matthew 5:25:
Agree with thine adversary quickly, whiles thou art in the way with him; lest at any time the adversary deliver thee to the judge, and the judge deliver thee to the officer, and thou be cast into prison.
According to Bishop Pillai, the daysman is called “mahatma,” or “great soul.” India has many mahatmas that act as daysmen. One who became well-known in the first half of the twentieth century was Mohandas Gandhi, an Indian nationalist leader who became known as Mahatma Gandhi. Light through an Eastern Window describes two boys with a dispute who go to the daysman.

After showing Eastern hospitality, the daysman sets out the sacred Scriptures for everyone to see. He points out to the boys how they were not doing God’s Word. When both are convinced of his words, the daysman lays his hands on their heads and asks them to forgive each other. Once again, things are set right between the boys and their families.
According to Nelson’s Illustrated Bible Dictionary, the daysman was usually a neutral person who brought reconciliation when two people were separated. Job had no daysman to reconcile him with God. This truth regarding the lack of a daysman can also be seen in I Samuel 2:25.
If one man sin against another, the judge shall judge him: but if a man sin against the Lord, who shall intreat for him?…
Today, there is a go-between to set things right between God and man.
I Timothy 2:5:
For there is one God, and one mediator between God and men, the man Christ Jesus.
Like the daysman, Jesus Christ reconciled us when we were separated from God.
II Corinthians 5:18:
And all things are of God, who hath reconciled us to himself by Jesus Christ….
In the time of Job, there was no daysman between God and man. Since that time, God has been gracious and merciful and sent Jesus Christ, His Son, to be our mediator. Jesus Christ is the daysman for us all so that we may be reconciled to God.

This is a reprint from the March/April 2009 issue of The Way Magazine.
Copyright© 2009 by The Way International. All rights reserved.
For more information on subscribing to The Way Magazine, Click Here