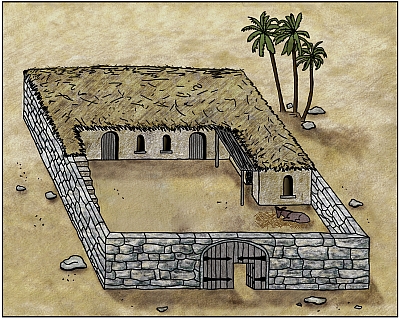 The courtyard, or court, of homes and other buildings in the East could be laid out in several ways. We can find much information about the various types of courtyards in books on manners and customs.
In Manners and Customs of the Bible, James M. Freeman explains that the court of an Eastern house is “the open space around which the house is built.” The size of the courtyard would depend on how many rooms you were planning to have facing this central area.
The New Wilson’s Old Testament Word Studies describes a court as being “a vacant space open to the sky, as of the tabernacle and temple, in the midst of a house built round about it; into which the windows mostly opened, and large doors; smaller windows and a low door for entrance from the street.” So we see that large buildings such as the Temple also had courtyards, or courts. We find the courts of the Temple referred to in this familiar verse.
Psalms 100:4:
Enter into his gates with thanksgiving, and into his courts with praise: be thankful unto him, and bless his name.
The New Bible Dictionary tells us that Herod’s Temple of New Testament times had four courts: the courts of the Gentiles, the women, the men (Israel), and the priests.
The simplest courtyards were those of farmers and villagers. Their houses ordinarily had only one room and a small courtyard surrounded by a wall for privacy. Some courtyards had a cistern in the center to catch rainwater. The farmer’s donkey might be kept there when it was not in the fields. Also, meals were often eaten in the courtyard. Jesus was no doubt entertained in the open courtyards of his hosts.
Those who were wealthy and lived in cities would generally have more elaborate homes with perhaps two, three, or more courts. Some of these were laid out with flowering trees, shrubs, and various flowers to beautify their courtyards.
The courtyard is considered to be a part of the Eastern house, and it is an important part of the house. If you are in the courtyard, you are in the house. This would be considered outdoors to the westerner.
We have examples of Peter in the courtyard at the palace of the high priest. In the Book of John, Peter was standing by the fire that was built in the courtyard of the high priest’s home when Jesus was being tried.
John 18:18:
And the servants and officers stood there, who had made a fire of coals; for it was cold: and they warmed themselves: and Peter stood with them, and warmed himself.
Peter had entered the door from the street to the courtyard (within the palace), and stood with the men who were warming themselves by the fire.
Later, in the Book of Matthew, Peter was sitting in this same courtyard.
Matthew 26:69:
Now Peter sat without in the palace….
This simply means that Peter was outside the actual rooms of the high priest’s palace; he was sitting in the open courtyard, which was within the building.
Access to the courtyard is typically through a large gate (or door) with a smaller door in the middle for everyday use. For a family gathering or celebration, the large door or gate is opened.
The door of the courtyard is very important. In Manners and Customs of Bible Lands, Fred H. Wight explains that the Eastern people are trained to listen to the voice at the door. This way no one will get into the home but one with a familiar voice. No one opens the door until they hear the familiar voice of the one knocking. In Acts 12, Peter is mentioned knocking at “the door of the gate.”
Acts 12:13 and 14:
And as Peter knocked at the door of the gate, a damsel came to hearken, named Rhoda.
And when she knew Peter’s voice, she opened not the gate for gladness, but ran in, and told how Peter stood before the gate.
The custom in the East is for the person outside to knock on the door. As soon as someone inside hears a voice, the one inside calls, “Who?” The one outside answers, “I.” Typically, if the person is a friend, their voice will be recognized, and someone opens the door. But in this record, Rhoda did not open the door immediately. Rhoda was so joyful that Peter was no longer in prison that she ran to tell the others he was standing at the gate. At first, they couldn’t believe that it was actually him.
Acts 12:15 and 16:
And they said unto her, Thou art mad. But she constantly affirmed that it was even so. Then said they, It is his angel.
But Peter continued knocking: and when they had opened the door, and saw him, they were astonished.
Once they had opened the door, Peter could enter and tell of his deliverance. It is likely that this took place in the courtyard.
Courtyards in the East ranged from those of the simple farmer and villager to the majestic courts of the Temple. Believers entered “into his gates with thanksgiving, and into his courts with praise…” (Psalms 100:4). Today, in the Grace Administration, we have received the gift of holy spirit. We can offer thanks and praise to God wherever we are as we magnify Him by praying in the spirit (I Corinthians 14:15).

This is a reprint from the March/April 2011 issue of The Way Magazine.
Copyright© 2011 by The Way International. All rights reserved.
For more information on subscribing to The Way Magazine, Click Here