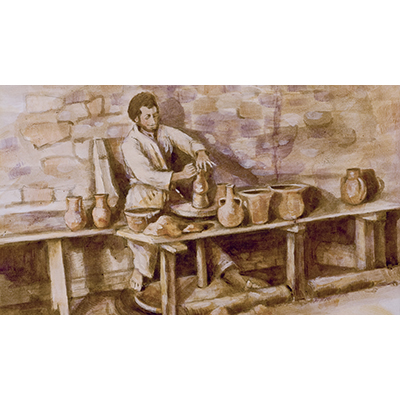 The making of pottery is one of the most important and necessary trades of the Bible lands. It is also one of the oldest. In Bible times the making of pottery was regarded as an inferior craft, but it met a universal need.
Clay jars and pots were used for carrying water from the well and for storing oil, honey, and grain. There was a real demand for pottery, not only because it was inexpensive, but also because it was very easily broken. Because pottery was porous, this caused evaporation in water jars. This helped keep the water cool.
The potter found the source of clay, and then nearby he built his workshop. This “potter’s house” was a functional building in which he could work his trade.
Isaiah 41:25:
…and as the potter treadeth clay.
When the potter found the clay, he made a pile of it and added water to make it moist. Then he tread upon the clay with his feet until he had the right consistency. He took the clay to his workshop and plopped it on the heavy bench close to his potter’s wheel.
The potter’s wheel was made of two flat wooden wheels. The upper wheel was supported on an axle, or a wooden shaft, standing in the center of the lower wheel. The lower wheel was put into action by the foot. This in turn began spinning the upper wheel in a horizontal motion.
Then the potter put a lump of clay on the upper revolving wheel. As the wheel turned, the clay was shaped into a cone-like vessel. The potter’s thumb made a hole in the top of the whirling clay. The opening enlarged as the wheel turned, widened by the thumb to the size of jar desired. Water was added if it seemed the clay was not moist enough to form the jar. A small piece of wood was used in the right hand to smooth the outside of the vessel.
If the vessel didn’t “shape up” right, the potter crushed the vessel into a lump, softened it with water, and started over.
Jeremiah 18:3 and 4 [The Amplified Bible]:
Then I went down to the potter’s house, and behold, he was working at the wheel.
And the vessel that he was making from clay was spoiled in the hand of the potter; so he made it over, reworking it into another vessel as it seemed good to the potter to make it.
After the clay was shaped, it needed to be hardened by baking it in ovens, called “kilns.” One pottery-making area discovered in Lachish, a city southwest of Jerusalem, was cut like a cave into the limestone there. This cave setting gave the pottery an even temperature for drying, and being outside the town walls, reduced the fire risk from the kiln.
The pottery was brittle and could easily break. Not only did this give the potter more work in replacing broken vessels, it provided broken pieces that could be used for daily activities. These fragments were called “potsherds,” or simply, “sherds.” Being frugal, Eastern women used the largest fragments as home implements.
Isaiah 30:14:
And he shall break it as the breaking of the potters’ vessel that is broken in pieces; he shall not spare: so that there shall not be found in the bursting of it a sherd to take fire from the hearth, or to take water withal out of the pit.
In Strange Scriptures That Perplex the Western Mind, Barbara M. Bowen describes how an Eastern woman would make use of two of the largest fragments from a broken vessel. She would put one fragment near the well or water pit to serve as a ladle for thirsty travelers. She used the other to carry glowing embers from the main village fire to the home fire.
When carried on the head on cold mornings, this potsherd with its warm embers literally warmed the person. Spiritually our love can “heap coals of fire” on one’s head and warm their heart.
Romans 12:20:
Therefore if thine enemy hunger, feed him; if he thirst, give him drink: for in so doing thou shalt heap coals of fire on his head.
Since parchment was very expensive, fragments of pottery were used for writing notes or memos. Many of these fragments, called “ostraca,” have been used by archaeologists to understand ancient village life. Even the smallest potsherds were used to scrape sores, since the clay of the jar was believed to have healing properties. Job used a potsherd to scrape his sore boils.
Job 2:7 and 8:
So went Satan forth from the presence of the Lord, and smote Job with sore boils from the sole of his foot unto his crown.
And he took him a potsherd to scrape himself withal; and he sat down among the ashes.
Some of the vessels made by the potter were used as vessels “unto honour” and others, as vessels “unto dishonour.”
Romans 9:21:
Hath not the potter power over the clay, of the same lump to make one vessel unto honour, and another unto dishonour?…

This is an excerpt from the November/December 2008 issue of The Way Magazine.
Copyright© 2008 by The Way International. All rights reserved.
For more information on subscribing to The Way Magazine, Click Here