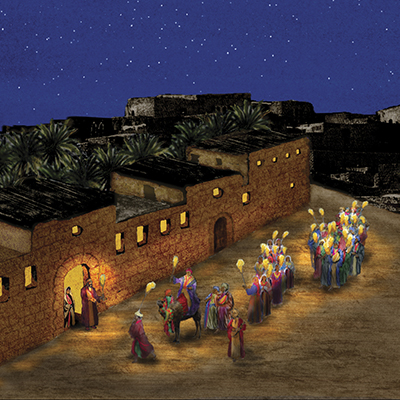 The wedding ceremony of the East was much different than those of the West today. The Judeans were a people who enjoyed festivals and elaborate celebrations. So a wedding was a good time to have a celebration.
In Jesus Christ Our Promised Seed, by Dr. Victor Paul Wierwille, we learn that in the Eastern culture a wedding could last as long as ten days. On the tenth day the bride and groom were declared husband and wife. Then, the “honeymoon” lasted twelve months. In this first year of marriage, the two young people just learned to understand and live with each other. The parents supported the bride and groom during this first year.
Bishop K. C. Pillai explained in Light through an Eastern Window that the couple alternated living with the groom’s parents and then with the bride’s parents. They commuted back and forth between the parents, concluding their first year of married life in the home of the bride’s parents.
During this year, if the husband was invited to a dinner someplace else, he had to decline, because during this time the couple took all their meals together at home with their parents.
Luke 14:20:
…I have married a wife, and therefore I cannot come.
A westerner who does not understand Eastern culture might call this a flimsy excuse, but this was a part of the tradition of the East. It would be unthinkable for a new husband to take a meal away from home and his wife during their first year. As Bishop Pillai wrote, “It is simply not done.”
At the conclusion of the couple’s first year of marriage, they took part in a unique ceremony that included all the people of the town. The husband brought his wife before all the people of the village. He and his wife faced each other with his best man on his right side and with the virgins who had attended the wedding on his left side. With loving authority he spoke these familiar words from John 14.
John 14:1-4:
Let not your heart be troubled: ye believe in God, believe also in me.
In my Father’s house are many mansions [rooms]: if it were not so, I would have told you. I go to prepare a place for you.
And if I go and prepare a place for you, I will come again, and receive you unto myself; that where I am, there ye may be also.
And whither I go ye know, and the way ye know.
Bishop Pillai noted that when Jesus Christ spoke these verses to his disciples during the evening of the last supper, these words were already a part of the Eastern marriage traditions of Jesus’ time. These words, spoken by the husband to his wife, prepared her for what would come next in their marriage.
By family tradition, every son had to live in his father’s house until his father’s death. So after his first year of marriage, the son left his wife for a short while to prepare a new apartment in his father’s house. The bride trusted the groom while he was away preparing their “apartment” in his father’s house. She did not worry if she failed to receive a letter or a bouquet of roses every day. She believed her husband’s words, “Let not your heart be troubled….” Her reply during the ceremony in which her husband’s promises were made to her was: “All that thou sayest, I will do.” Then after their apartment was completed, the husband returned for his wife as he had promised.
By using the very words of a bridegroom to his bride, Jesus Christ taught a lesson. Christ comforted his disciples regarding his resurrection and return by using these familiar words. Because Jesus Christ used the customs of his day, people could understand more readily the meaning of his teachings and relate to what he said.
Next, we will look at the customs of the initial wedding festivities. These customs can also help us to better understand the Scriptures. Each marriage in the East began at midnight. The bridegroom’s party needed to go through the gates of the city at midnight, and all his friends and relatives arranged the journey from their various homes to arrive at the gates at this hour. Located beside the gates of the city was an inn to accommodate wedding parties and travelers.
A special apartment was kept in the inn for the ten virgins attending the bride. In the West a bridesmaid is not necessarily a virgin; in the East she must be a virgin. They must sleep in the inn while awaiting the bridegroom’s party.
Matthew 25:5:
While the bridegroom tarried, they all [the virgins] slumbered and slept.
And at midnight as the groom approached the inn, a groomsman blew a silver trumpet and cried out:
Matthew 25:6:
…Behold, the bridegroom cometh; go ye out to meet him.
When the virgins heard the trumpet and the groomsman’s voice, they arose, poured oil in their lamps (special wedding torches), and lit them. The virgins went out of the inn, lined up along the road, and bowed to the bridegroom’s party as they met. Then the entire party went to the home of the bride. It was a very colorful procession: the torches were lit, the people wore elaborately decorated robes, and some of the party played musical instruments as they walked along….

This is an excerpt from the July/August 2007 issue of The Way Magazine.
Copyright© 2007 by The Way International. All rights reserved.
For more information on subscribing to The Way Magazine, Click Here