Home » Articles » Manners and Customs » The Gates of the City 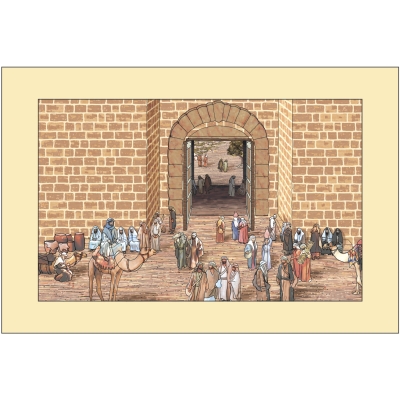 In early Old Testament times, a place of great importance in a city was its city gates. The Mosaic law recognized the city gates as the place of justice—the place for judicial proceedings.
Deuteronomy 16:18:
Judges and officers shalt thou make thee in all thy gates, which the Lord thy God giveth thee, throughout thy tribes: and they shall judge the people with just judgment.
The judges were very important in helping the people make decisions in their lives. The judges sat on stone seats that were placed at the city gates. Here they could hold court and solve disputes that the people brought to them. The city gates provided security, and this was also a place where people could have meetings with families or friends and handle other business transactions. The city’s markets were often at the city gates as well.
The gate area was a cool place to meet on a hot day because of the shade that the arched gates and their towers provided. In some cities, this area was large enough to resemble a large stone hall suitable for meetings. The prophets often came to the gate to preach because of the large gathering of people there.
Jeremiah 17:19 and 20:
Thus said the Lord unto me; Go and stand in the gate of the children of the people, whereby the kings of Judah come in, and by the which they go out, and in all the gates of Jerusalem;
And say unto them, Hear ye the word of the Lord, ye kings of Judah, and all Judah, and all the inhabitants of Jerusalem, that enter in by these gates.
As was the custom, Lot was sitting in the gate of the city when the angels came to Sodom at the end of the day.
Genesis 19:1:
And there came two angels to Sodom at even; and Lot sat in the gate of Sodom: and Lot seeing them rose up to meet them….
The two angels came at “even,” meaning the gates would soon be closed. Closing the gates at sundown and opening them at sunrise was a custom for protection. There was always a watchman or guard at the gates from sunset to sunrise.
The city gates, towers, and high walls all provided protection for the city. The Old Testament city of Lachish provides an excellent example. Lachish had two fortified walls and a double gate. King Solomon erected a magnificent fortified gate at the military stronghold of Megiddo.
An example of a transaction that took place in the city gate is found in the Book of Ruth. Boaz gathered the elders of the city at the gate to witness a transaction he was making.
Ruth 4:1 and 2:
Then went Boaz up to the gate, and sat him down there: and, behold, the kinsman of whom Boaz spake came by; unto whom he said, Ho, such a one! turn aside, sit down here. And he turned aside, and sat down.
And he [Boaz] took ten men of the elders of the city, and said, Sit ye down here. And they sat down.
By reading the complete chapter, we get a very good picture of the importance of this transaction that took place in the city gate. Boaz made a “deal” to be Ruth’s kinsman redeemer, and he asked the elders and townspeople present to witness the decision.
Ruth 4:11:
And all the people that were in the gate, and the elders, said, We are witnesses….
The Scriptures also mention how the gates of the city were constructed. The large gates could have two leaves (doors) that opened in the middle.
In Isaiah 45:1 we read:
…I will…open before him the two leaved gates….
In the Book of Judges we read about Samson and the “doors of the gate.” Samson unhitched both leaves.
Judges 16:3:
And Samson…arose at midnight, and took the doors of the gate of the city, and the two posts, and went away with them….
So, some city gates could be removed if you were strong like Samson.
The vicinity of the city gates seemed to have the most activity in the city. Many of the people worked on the farms or in the fields outside the city. They brought produce to the city early enough to have a marketplace at the gate and to sell vegetables for supper. The arrival of caravans would also be cause for bustling activity at the gates. So the gate area was kept very busy during the day.
From the standpoint of security, the gates were the most important part of the city. In time of war, enemies often attacked at the city gates. If they were successful in capturing the gates, the city was considered captured.
The gates of the ancient city stayed open from sunrise to sunset, but God’s Word tells us in the Book of Revelation that there will one day be a city whose gates will always be open.
Revelation 21:25:
And the gates of it shall not be shut at all by day: for there shall be no night there.

This is a reprint from the July/August 2009 issue of The Way Magazine.
Copyright© 2009 by The Way International. All rights reserved.
For more information on subscribing to The Way Magazine, Click Here