Home » Articles » Manners and Customs » The Hem of His Garment 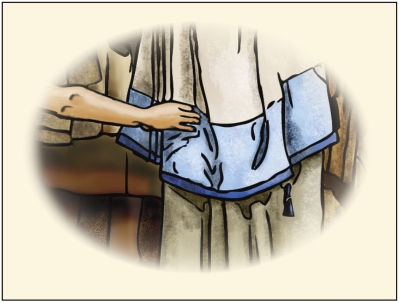 The Western mind does not always understand the meaning of scriptures where Eastern customs are involved. Therefore, we have to investigate, or search out, the meaning of these customs.
Matthew 9:20 is a verse that can be readily understood when the light of Eastern manners and customs is shed upon it.
Matthew 9:20:
And, behold, a woman, which was diseased with an issue of blood twelve years, came behind him, and touched the hem of his garment.
The phrase “touched the hem of his garment” is what we will investigate in this verse. We first need to go back to the Old Testament and find out what the Lord had Moses say to the children of Israel regarding the hems of their garments.
Numbers 15:38-40:
Speak unto the children of Israel, and bid them that they make them fringes in the borders of their garments throughout their generations, and that they put upon the fringe of the borders a ribband of blue:
And it shall be unto you for a fringe, that ye may look upon it, and remember all the commandments of the Lord, and do them….
That ye may remember, and do all my commandments, and be holy unto your God.
The New International Version of the Bible provides us with a clearer picture of the meaning of fringes and borders.
Numbers 15:38 and 39:
…‘Throughout the generations to come you are to make tassels on the corners of your garments, with a blue cord on each tassel.
You will have these tassels to look at and so you will remember all the commands of the Lord, that you may obey them….’
Dr. William Barclay in his Daily Study Bible series, The Gospel of Mark, writes about the fringes, or tassels, worn by the devout Judeans of Jesus’ time:

Every devout Jew wore an outer robe with four tassels on it, one at each corner. These tassels were worn in obedience to the command in Numbers 15:38-40, and they were to signify to others, and to remind the man himself, that the wearer was a member of the chosen people of God. They were the badge of a devout Jew.

It is likely that Jesus wore the traditional clothing of the day, which consisted of a long robe and a shorter outer robe—a cloak, or mantle—that had the fringes, or tassels, on it. At each of the four corners of the shorter outer garment was a tassel which had one thread of blue woven into it. Since the outer garment was shorter, this prevented the tassels from touching the ground.
Those who were sick wanted to touch the tassels because they believed these tassels had the power to heal. Bishop K. C. Pillai taught that these fringes represented the power and presence of God. The woman in Matthew 9:20 came with believing and touched the hem of Jesus’ garment.
Matthew 9:20-22:
And, behold, a woman, which was diseased with an issue of blood twelve years, came behind him, and touched the hem of his garment:
For she said within herself, If I may but touch his garment, I shall be whole.
But Jesus turned him about, and when he saw her, he said, Daughter, be of good comfort; thy faith hath made thee whole. And the woman was made whole from that hour.
Jesus was well aware that some power had gone out of him. He knew someone had touched him (Luke 8:45 and 46). The disciples did not understand why Jesus should ask such a question when so many people were around him. The woman understood what he meant because she knew that she was now healed. She had been afraid that because she was ceremonially unclean he would not want her to touch him. He wanted to bless the person who believed that all she had to do was touch his garment. So by her believing she was healed.
Since the woman had come to Jesus through the crowd from behind (Luke 8:44), they might have assumed something was wrong with her. She was considered ceremonially unclean, but she had a need that she believed only Jesus could heal. The crowd may have considered her as someone unimportant, but by her believing the woman was made whole.
The Pharisees also wore the traditional robe with fringes, or tassels. They wore this outer garment to identify themselves as loyal to the law. They even lengthened their tassels to make a show of this loyalty. They wanted people to know they were separate from other Judeans.
Matthew 23:5:
But all their [the Pharisees’] works they do for to be seen of men: they make broad their phylacteries, and enlarge the borders [tassels] of their garments.
The Pharisees wanted to draw attention to themselves, but Jesus wanted to give out God’s Word and bring deliverance to those with needs. Jesus had a loving, compassionate attitude to the meek who came to him with a need, and he brought deliverance to the woman who touched “the hem of his garment.” Today we follow his example as we bring God’s healing deliverance to those in need. We draw attention to our Father, glorifying God.
Matthew 5:16:
Let your light so shine before men, that they may see your good works, and glorify your Father which is in heaven.

This is a reprint from the March/April 2008 issue of The Way Magazine.
Copyright© 2008 by The Way International. All rights reserved.
For more information on subscribing to The Way Magazine, Click Here