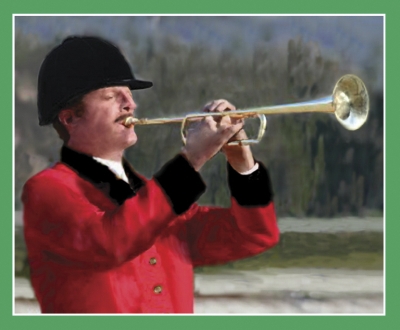 The job of the herald of Bible times was to announce, or proclaim. In the United States of America, we have a great present-day example of a herald. In the state of Kentucky, in the city of Louisville, we have a prestigious horse race called the Kentucky Derby. Thoroughbred horses, the best you can find, “run for the roses”—the blanket of roses that will be presented to the winner.
The herald, or track bugler, calls attention to the race when it is soon to start. He comes out in view of the crowd with what is called a “herald extended bugle.” He wears a red jacket and a black cap with a visor. He plays this long bugle to call to everyone’s attention that the horses are coming onto the track. This is a tradition (custom) that is repeated every year on the first Saturday in May.
Heralds in Bible times also got the people’s attention. In both the Old and New Testaments, we find good illustrations of the herald as part of the customs of the day.
In the Book of Daniel, the herald who worked for King Nebuchadnezzar “cried aloud” to get the people’s attention and give them a message from the king.
Daniel 3:4 and 5:
Then an herald cried aloud, To you it is commanded, O people, nations, and languages,
That at what time ye hear the sound of the cornet, flute, harp, sackbut, psaltery, dulcimer, and all kinds of musick, ye fall down and worship the golden image that Nebuchadnezzar the king hath set up.
This herald announced that the people must worship the golden image when they heard the sound of the musical instruments. The sound of the instruments would bring to the people’s minds what the herald had proclaimed.
Noah proclaimed God’s message to the people of his time.
II Peter 2:5:
…but [God] saved Noah…a preacher of righteousness….
The word translated “preacher” in the King James Version is translated “herald” in the Revised Standard Version. The Greek word is kērux and refers to a preacher, crier, proclaimer, or herald. In his lexicon, E. W. Bullinger defines kērux as “a public servant of the supreme power, both in peace and war.” He also explains that a herald is one who summons the church and conveys messages; it is also “one who proclaims or communicates something.” The Greek word also carries the meaning of proclaiming a message without the idea of teaching.
The Prophet Isaiah foretold of two great heralds—John the Baptist and Jesus the Christ. John the Baptist was a herald preceding the coming of the Messiah, to announce his coming and prepare the way.
Matthew 3:1-3:
In those days came John the Baptist, preaching [heralding] in the wilderness of Judaea,
And saying, Repent ye: for the kingdom of heaven is at hand.
For this is he that was spoken of by the prophet Esaias [Isaiah], saying, The voice of one crying in the wilderness, Prepare ye the way of the Lord, make his paths straight.
Then in Matthew 4, we find Jesus Christ preaching, or heralding, the Kingdom of Heaven.
Matthew 4:17 and 23:
…Jesus began to preach [herald], and to say, Repent: for the kingdom of heaven is at hand.
And Jesus went about all Galilee, teaching in their synagogues, and preaching [heralding] the gospel of the kingdom, and healing all manner of sickness and all manner of disease among the people.
In I Corinthians, the Apostle Paul represented himself as a herald.
I Corinthians 9:27:
But I keep under my body, and bring it into subjection: lest that by any means, when I have preached [heralded] to others, I myself should be a castaway.
The literal translation according to Biblical usage of this verse is, “I keep my body under and bring it into subjection that in no way, having heralded the summons for the competition, I myself prove to be rejected from the competition.” Paul was not only the herald but also a competitor in the contest.
Paul and those who read this epistle would have been familiar with the heralds of the Greek athletic games held on the Isthmus of Corinth (Isthmian games). The herald summoned the competitors. At the end of an athletic event, a herald loudly proclaimed the name of the winner and the city they represented.
Paul proclaimed himself to be a herald in I and II Timothy also.
I Timothy 2:7:
Whereunto I am ordained a preacher [herald]….
II Timothy 1:11:
Whereunto I am appointed a preacher [herald]….
Heralds played a significant role in Bible times. Today, as born-again believers, we are heralds for God as we proclaim and give forth the glad tidings of His Word.
Romans 10:15:
And how shall they preach [herald], except they be sent? as it is written, How beautiful are the feet of them that preach the gospel of peace, and bring glad tidings of good things!

This is a reprint from the March/April 2010 issue of The Way Magazine.
Copyright© 2010 by The Way International. All rights reserved.
For more information on subscribing to The Way Magazine, Click Here