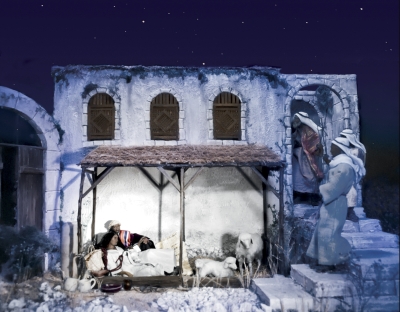 Our ministry’s publications can be very helpful in our study of Eastern manners and customs. For example, page 208 of Jesus Christ Our Promised Seed, by Victor Paul Wierwille, has some interesting details about what the inn of Luke 2:7 may have been like. The footnotes at the bottom of that page also lead us to some wonderful explanations of the scriptures and customs involved.
Luke 2:6 and 7 give us some background information concerning the inn and the birth of Jesus Christ.
Luke 2:6 and 7:
And so it was, that, while they [Joseph and Mary] were there [in Bethlehem], the days were accomplished that she should be delivered.
And she brought forth her firstborn son, and wrapped him in swaddling clothes, and laid him in a manger; because there was no room for them in the inn.
Jesus Christ Our Promised Seed, page 208, gives some details about the inn.

The inn of verse 7 was a lodging house or khan, a place where caravans stopped for lodging. Normally, the design of an inn consisted of an inner court surrounded on four sides by the building itself. Along the back wall on the outside of the inn would be stables for asses, camels, and other animals….

The Eastern inns of Bible times had no resemblance to the Western inns of today. There were various kinds of oriental inns. Some were rude dwellings, and others were quite spacious and comfortable. Since no rooms were available in the inn itself, Joseph and Mary took advantage of space in the stable. This also gave them some privacy. Mary didn’t have to give birth to God’s Son in a noisy, overcrowded inn.
Jesus Christ Our Promised Seed continues:

Within each stable would be a manger with straw in it. Normally the manger would be used as a feeding trough for the animals in the stable. Thus, by context, the manger in which the newborn Christ child was laid was located in a stable or stall connected to the back of the inn. This is a more likely location of the manger than the traditional site of a cave in the Bethlehem area….

Footnote 14 at the bottom of page 208 explains further:

The inn of Luke 2:7 raises some interesting possibilities. King David’s family originally lived in Bethlehem and so owned property there (I Samuel 16:1-4)….

In the Old Testament, Bethlehem is mentioned when God told the Prophet Samuel to go to Jesse’s home in Bethlehem and anoint one of his sons king of Israel.
I Samuel 16:1 and 4:
And the Lord said unto Samuel,…fill thine horn with oil, and go, I will send thee to Jesse the Bethlehemite: for I have provided me a king among his sons.
And Samuel did that which the Lord spake, and came to Bethlehem….
Knowing the connection to King David brings even more significance to the location of Jesus Christ’s birth. As we continue reading footnote 14, we find additional relevant scriptures and more details about the inn of Jesus’ birth.

Thus it may be that Jesus was born on that very property originally belonging to the family of David. Furthermore, when David was king, he rewarded a servant named Chimham at the request of an aged man named Barzillai (II Samuel 19:31-40; I Kings 2:7). Evidently this reward to Chimham included a habitation (or, at least, the property upon which the habitation was located) in the area of Bethlehem of Judah. The description of this habitation in Jeremiah 41:17 indicates it was a khan or inn that served as a stopover point for caravans traveling through Palestine to Egypt. Thus, it is distinctly possible that the inn of Luke 2:7 was the inn given to Chimham which originally belonged to the family of David. This would put Christ’s birth literally “in the house of David.”

This is a reprint from the November/December 2010 issue of The Way Magazine.
Copyright© 2010 by The Way International. All rights reserved.
For more information on subscribing to The Way Magazine, Click Here