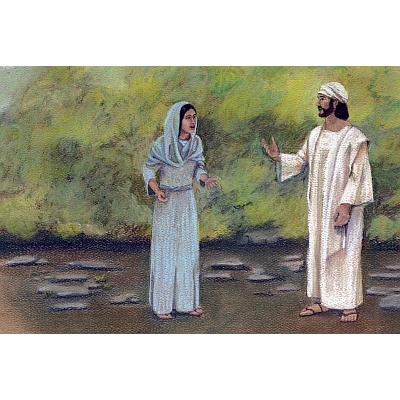 Throughout his earthly ministry, Jesus Christ always demonstrated God’s love and care for others. He preached and ministered to crowds, but the real essence of his life was in reaching individuals with God’s Word and God’s love. Every minute he spent on earth was valuable, and yet we see throughout his earthly ministry that he took time to be with just one, two, or a few individuals to minister to their needs. Even at his crucifixion, while dying on the tree, he turned to one of the malefactors and promised him a future paradise. He also made sure his mother was cared for, thoughtfully entrusting her to the disciple whom he loved. This pattern of demonstrating God’s love and care for the individual continued after he was raised from the dead and all the way through to his ascension.
Let’s take some time to observe his example of exhibiting God’s love and care in his resurrected body during his last days on earth. We will not look at every one of his resurrection appearances, but by looking at a few of his appearances to his devoted followers, we will gain a greater understanding of how to more dynamically “walk in love, as Christ also hath loved us…” (Ephesians 5:2).
First we will focus on the love and care of the resurrected Christ in his appearance to Mary Magdalene. Before we look at this record, we will consider the relationship he had with Mary before his crucifixion. Jesus had endeared himself to this woman by healing her infirmities and delivering her from devil-spirit possession.
Luke 8:1-3:
And it came to pass afterward, that he [Jesus] went throughout every city and village, preaching and shewing the glad tidings of the kingdom of God: and the twelve were with him,
And certain women, which had been healed of evil spirits and infirmities, Mary called Magdalene, out of whom went seven devils,
And Joanna the wife of Chuza Herod’s steward, and Susanna, and many others, which ministered unto him of their substance.
Mary Magdalene was a follower of Jesus Christ. She was with him as he preached throughout every city and village. Verse 2 says she was one of the “certain women, which had been healed of evil spirits and infirmities…out of whom went seven devils.” Mark 16 tells us that it was Jesus who cast those spirits out of her.
Mark 16:9:
Now when Jesus was risen early the first day of the week, he appeared first to Mary Magdalene, out of whom he had cast seven devils.
It is likely that Mary Magdalene had lived a troubled life before meeting Jesus. Having experienced great deliverance in her life, she reciprocated by giving her life in service to the master. She became one of Jesus’ most loving and devoted followers, being one of the few still with him at his crucifixion.
John 19:25:
Now there stood by the cross of Jesus his mother, and his mother’s sister, Mary the wife of Cleophas, and Mary Magdalene.
Mary Magdalene was with Jesus Christ when he took his last breath. And after three days, upon the first day of the week, she was at the sepulchre where he had been laid to rest.
John 20:1:
The first day of the week cometh Mary Magdalene early, when it was yet dark, unto the sepulchre, and seeth the stone taken away from the sepulchre.
Early in the morning, well before sunrise, Mary Magdalene arrived at the sepulchre, expecting to find the body of Jesus. There she found that the large stone, which had covered the entrance to the sepulchre, was removed and the body of Jesus gone. Verses 2-10 tell us she ran to Simon Peter, who had another disciple with him, and anxiously told them that someone had stolen the body of Jesus. Peter and this other disciple ran to the sepulchre and found Jesus’ body gone, but his grave wrappings were totally intact, and the cloth that covered his head was lying neatly folded in a place by itself. The two then returned to their place, but Mary Magdalene, who had followed them to the sepulchre, stayed behind. And there she stood alone, weeping.
John 20:11-14:
But Mary stood without at the sepulchre weeping: and as she wept, she stooped down, and looked into the sepulchre,
And seeth two angels in white sitting, the one at the head, and the other at the feet, where the body of Jesus had lain.
And they say unto her, Woman, why weepest thou? She saith unto them, Because they have taken away my Lord, and I know not where they have laid him.
And when she had thus said, she turned herself back [turned around], and saw Jesus standing, and knew not that it was Jesus.
This is the first recorded appearance Jesus Christ made in his resurrected body to another person. We saw in Mark 16:9 that “he appeared first to Mary Magdalene.” What a significant event—yet we see no ceremony or pageantry. It didn’t take place in a huge stadium, and there was no international press corps reporting on the event. This appearance wasn’t to the ruling elders of Israel or to Caesar in Rome. Perhaps the most remarkable aspect of this first appearance is its simplicity. Jesus Christ appeared to a single, solitary soul—this woman named Mary Magdalene….

This is an excerpt from the March/April 2012 issue of The Way Magazine.
Copyright© 2012 by The Way International. All rights reserved.
For more information on subscribing to The Way Magazine, Click Here