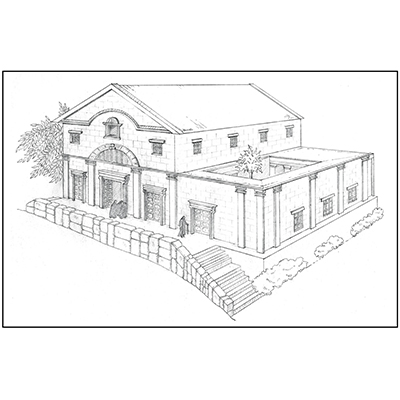 During Jesus Christ’s earthly ministry, he often taught in synagogues, where Judeans who had an interest in God and the things of God regularly gathered.
John 18:20:
Jesus answered him, I spake openly to the world; I ever taught in the synagogue, and in the temple, whither the Jews [Judeans] always resort; and in secret have I said nothing.
The focus of Jesus Christ’s earthly ministry was to reach “the lost sheep of the house of Israel” (Matthew 15:24), and culturally, synagogues were ideal places for him to reach them with the truth of God’s Word. Synagogues were in most all the cities and villages in which he ministered.
Matthew 9:35:
And Jesus went about all the cities and villages, teaching in their synagogues, and preaching the gospel of the kingdom, and healing every sickness and every disease among the people.
Matthew 12:9,10,13:
And when he was departed thence, he went into their synagogue:
And, behold, there was a man which had his hand withered….
Then saith he [Jesus] to the man, Stretch forth thine hand. And he stretched it forth; and it was restored whole, like as the other.
The synagogue was a great place for Jesus to minister God’s Word, to be a witness, and to find interested people. However, he taught in other locations as well, including people’s homes, for there was only so much he could accomplish in the synagogue with its established system. In many instances in the four Gospels, we can see that Jesus took the Word of deliverance into the homes, where he had more freedom to teach and minister. This departure from Judean custom was highly unusual.
What can we learn about the synagogue and its customs during the ministry of Jesus Christ?
Synagogues were an established part of the Judean culture of Jesus’ day. The synagogue was a place where the people regularly gathered, and it provided a place for instruction and schooling. In the book On the Trail of Manners and Customs of the Bible, by Bernita Jess, we read, “Hebrew boys in Israel began studying at the synagogue schools when they were between five and six years of age.”
E. W. Bullinger’s lexicon shows that the word “synagogue” comes from the Greek word sunagōgē, which means an assembly or congregation. It can apply to the people in the assembly itself or to the building—the house of assembly.
Synagogues could be found in every city and in all villages except the very smallest. At least ten men were required to organize a congregation. It is likely that the Judeans often met at first in a large room in a house. If the people had the means, they could build a synagogue or adapt an existing building for their purposes.
While the architecture of the buildings varied greatly, whenever possible, the synagogue was built on a hill or a high place so that no house might overlook it. If a high place could not be found, they put a long pole in the center and raised it high above the rooftops of the homes so the building would be prominent or obvious for everyone.
Some synagogues were constructed so that as the people entered, they faced Jerusalem. The Judeans faced toward the holy city when they prayed. Also there would be a chest, usually located at the Jerusalem end of the synagogue, where the scrolls of Scripture were kept. A raised platform, a bēma, was placed as a pulpit so all could see and hear the leader.
The first-century synagogue was a Judean place of prayer, reading of Scripture, and teaching. Prayers were read as a part of the synagogue services in Jesus’ day. Following the prayers came the reading of the Scriptures, then teaching. “Reading and expounding the law was the great business of the synagogue…,” as stated in James M. Freeman’s Manners and Customs of the Bible.
After the Babylonian captivity, the people were no longer fluent in Hebrew. Therefore, a verse of scripture was first read in Hebrew and then translated into the Aramaic vernacular—one verse at a time. Scriptures were read with the leader standing. For teaching, however, a sitting posture was taken. We see both customs of standing and sitting in Jesus’ visit to the synagogue in Luke 4:16-22:
And he [Jesus] came to Nazareth, where he had been brought up: and, as his custom was, he went into the synagogue on the sabbath day, and stood up for to read.
And there was delivered unto him the book of the prophet Esaias [Isaiah]. And when he had opened the book [scroll], he found the place where it was written,
The Spirit of the Lord is upon me, because he hath anointed me to preach the gospel to the poor; he hath sent me to heal the brokenhearted, to preach deliverance to the captives, and recovering of sight to the blind, to set at liberty them that are bruised,
To preach the acceptable year of the Lord.
And he closed the book [scroll], and he gave it again to the minister, and sat down. And the eyes of all them that were in the synagogue were fastened on him.
And he began to say unto them, This day is this scripture fulfilled in your ears.
And all bare him witness, and wondered at the gracious words which proceeded out of his mouth….
In Biblical Geography and Antiquities, E. P. Barrows elaborates:

With the reading of the prophetical sections the oral discourse which followed was naturally connected, as we see in our Saviour’s case. In this department of the synagogue service much freedom seems to have been allowed. Any priest, elder, or other person skilful in the law, had liberty to speak, and strangers of distinction were also invited to address the congregation.

Surely no synagogue was ever addressed by a man of greater distinction than the Son of God, our lord and savior!…

This is an excerpt from the January/February 2013 issue of The Way Magazine.
Copyright© 2013 by The Way International. All rights reserved.
For more information on subscribing to The Way Magazine, Click Here