Home » Articles » Manners and Customs » Under the Fig Tree 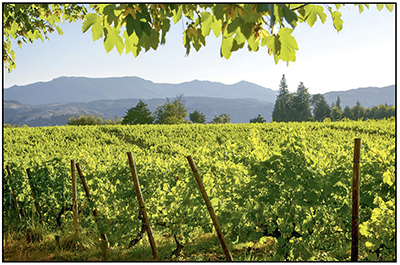 So many scriptures can be understood by simply reading what’s written in the verse. But at times we may need to look at Eastern customs in order to understand an expression. Let’s see an expression Jesus used in the Gospel of John about a disciple named Nathanael.
John 1:48:
Nathanael saith unto him, Whence knowest thou me? Jesus answered and said unto him, Before that Philip called thee, when thou wast under the fig tree, I saw thee.
What did Jesus mean when he said, “when thou wast under the fig tree, I saw thee”? To answer that question, let’s first look at the context of this statement to see what the record is all about. Early in Jesus’ ministry, John the Baptist boldly declared who Jesus was.
John 1:29 and 34:
The next day John seeth Jesus coming unto him, and saith, Behold the Lamb of God, which taketh away the sin of the world.
And I saw, and bare record that this is the Son of God.
John the Baptist bare record that Jesus was the Son of God, the Messiah. John continued his declaration the following day.
John 1:35-40:
Again the next day after John stood, and two of his disciples;
And looking upon Jesus as he walked, he saith, Behold the Lamb of God!
And the two disciples heard him speak, and they followed Jesus.
Then Jesus turned, and saw them following, and saith unto them, What seek ye? They said unto him, Rabbi, (which is to say, being interpreted, Master,) where dwellest thou?
He saith unto them, Come and see. They came and saw where he dwelt, and abode with him that day: for it was about the tenth hour.
One of the two which heard John speak, and followed him, was Andrew, Simon Peter’s brother.
Andrew and another disciple of John the Baptist heard him declare that Jesus was the “Lamb of God.” After hearing this great truth, these two disciples followed Jesus. When Jesus saw them following him, he asked them what they were seeking. They wanted to know where Jesus was staying. Jesus invited them to join him, and they came for the rest of the day since it was already about four in the afternoon. One of the two disciples was Andrew—who couldn’t keep this good news to himself.
John 1:41 and 42:
He first findeth his own brother Simon, and saith unto him, We have found the Messias, which is, being interpreted, the Christ.
And he brought him to Jesus. And when Jesus beheld him, he said, Thou art Simon the son of Jona: thou shalt be called Cephas, which is by interpretation, A stone.
Now both Andrew and his brother, Simon Peter, as well as an unnamed disciple of John had met Jesus. These two brothers believed him to be the Messiah. But there were still more disciples to be found!
John 1:43 and 44:
The day following Jesus would go forth into Galilee, and findeth Philip, and saith unto him, Follow me.
Now Philip was of Bethsaida, the city of Andrew and Peter.
The word about Jesus being the Messiah was beginning to get around. Philip wanted to go tell someone else about this great discovery as well!
John 1:45 and 46:
Philip findeth Nathanael, and saith unto him, We have found him, of whom Moses in the law, and the prophets, did write, Jesus of Nazareth, the son of Joseph.
And Nathanael said unto him, Can there any good thing come out of Nazareth? Philip saith unto him, Come and see.
Nathanael wasn’t sure that the Messiah could come from the small Galilean village of Nazareth. Philip encouraged Nathanael to see for himself.
John 1:47 and 48:
Jesus saw Nathanael coming to him, and saith of him, Behold an Israelite indeed, in whom is no guile!
Nathanael saith unto him, Whence knowest thou me?…
Nathanael did not know Jesus, so he asked Jesus how he knew him. He was puzzled as to how Jesus could praise him as an Israelite who was without guile—one who was without deceit or falsehood in his life. We see Jesus readily explain this statement.
John 1:48:
…Jesus answered and said unto him, Before that Philip called thee, when thou wast under the fig tree, I saw thee.
These words clearly communicated to Nathanael, as we see in his response to Jesus.
John 1:49 and 50:
Nathanael answered and saith unto him, Rabbi, thou art the Son of God; thou art the King of Israel.
Jesus answered and said unto him, Because I said unto thee, I saw thee under the fig tree, believest thou? thou shalt see greater things than these.
Jesus’ words about seeing Nathanael under the fig tree made an impact on Nathanael to the extent that he realized Jesus was the Son of God. Why did these words make such an impression? “When thou wast under the fig tree, I saw thee” is a familiar saying in the East. It is an idiom, a peculiar or figurative usage of words, which Nathanael easily understood in that culture. Understanding some of the customs relating to the fig tree can help us understand this idiom used by Jesus in his culture….

This is an excerpt from the March/April 2016 issue of The Way Magazine.
Copyright© 2016 by The Way International. All rights reserved.
For more information on subscribing to The Way Magazine, Click Here