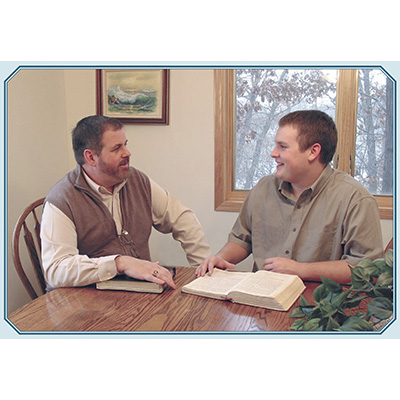 My wife and I have the blessing of raising two wonderful sons. Some time ago, while working with one of our sons, I found myself “laying down the law” on an issue. I made it clear to him what I wanted, and he responded with a reluctant, “Yes, sir.” While it was apparent that he was going to comply with my instructions, I was not at peace with the situation. I did not want him governed solely by a set of demands placed on him. My desire was for him to do the right things because he wanted to.
At the very least, I wanted to be sure he understood that what I asked of him was because I love him and want the best for him. I stopped and took the time to show him the heart and benefits behind my request. Not only did he carry out my instruction at the time, but he also has now built it into his life-style and does it regularly, on his own.
Just as an earthly father wants his sons to obey with a willing heart, our heavenly Father desires our obedience to come from our heart of love for Him and our understanding of His love for us. God has given us freedom of will, so that we may obey Him out of love, by our choice. Free will allows us to choose to obey God from our heart and thus receive the full benefit of His blessings.
Let’s examine free will first of all as seen in the angels. In God’s original creation, there were three archangels: Michael, Gabriel, and Lucifer. These three spirit beings carried vast responsibility in the administration of God’s creation. They were responsible for all the other angels in heaven. They were each created with great power and ability, and God gave them the freedom of choice. They had the freedom of will to carry out their functions. Both Michael and Gabriel decided to worship and serve the one true God, and they continue to function in their respective responsibilities today.
Lucifer, on the other hand, made a different choice. He decided to rebel against God. He attempted to elevate himself and his own desires above those of his Creator.
Isaiah 14:12-14:
How art thou fallen from heaven, O Lucifer, son of the morning! how art thou cut down to the ground, which didst weaken the nations!
For thou hast said in thine heart, I will ascend into heaven, I will exalt my throne above the stars of God: I will sit also upon the mount of the congregation, in the sides of the north:
I will ascend above the heights of the clouds; I will be like the most High.
Lucifer misused his freewill choice in an attempt to usurp the throne of God. Furthermore, he caused mutiny in heaven, as one-third of the angels followed his leadership in conspiring against God.
God extended freedom of will to all of the angels. Michael and Gabriel, along with two-thirds of the angels of heaven, made the right choice. They chose to obey God and receive the benefits of serving Him. Lucifer and one-third of the angels chose the wrong course and were cast out of heaven. What we see from this is that God made it available to all the angels to make the right choice. He does this for mankind as well.
God gave man freedom of will when He originally formed, made, and created man. God built man from the ground up, just the way He wanted—with body, soul, and spirit. When He was all done, He said that everything was “very good.”
Genesis 1:31:
And God saw every thing that he had made, and, behold, it was very good….
A part of that goodness was in giving man the ability to make decisions. God extended to man free will and the privilege to choose from a willing heart. God equipped Adam and Eve with all they needed to obey Him from the heart. He gave them clear and specific instructions on how to carry out their responsibilities, but He did not force them to obey.
For a time Adam and Eve did choose to obey God. But then they chose to walk according to their five senses rather than according to what God had told them. In Genesis 3, we see that fallen Lucifer, also called the serpent, deceived Eve. Adam followed her in the transgression, and they disobeyed God’s instructions. This was not God’s will, but as we saw with the angels, God did make it available for Adam and Eve to make the right choice. God desired their obedience so that His blessings could freely flow to them. When Adam and Eve recognized their error, God was able to restore them to fellowship with Him. This is a wonderful truth.
God wants us to obey with a willing heart. He does not force us to do His will, but He desires for us to walk on His Word so that we can receive the benefits of His love. God purposefully and wonderfully designed mankind to function with freewill choice….

This is an excerpt from the March/April 2006 issue of The Way Magazine.
Copyright© 2006 by The Way International. All rights reserved.
For more information on subscribing to The Way Magazine, Click Here