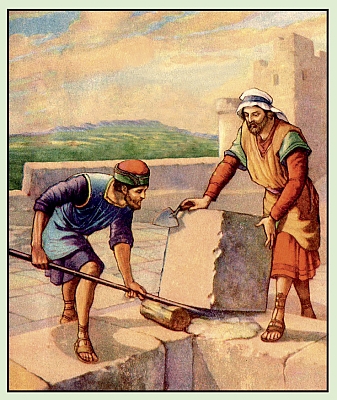 Shortly after graduating from high school, I was hired to work as a teller at a financial institution. At the end of the training period, I was assigned a metal drawer with a key in the lock and was told to open it. When I opened the drawer, I saw more money than I had ever seen in my life! This company entrusted me with a lot of money, and I considered it a privilege to be given the responsibility to take care of these funds and to use them according to how I had been instructed.
Because of the godly principles taught in my home when I was a child, I never thought of this money as being my own but rather as funds I was given to steward. Standing firm on godly principles can help us be successful and be good witnesses for God in the field of finance.
Handling or managing the financial resources of others is like being a steward. One definition of a steward is “a fiscal agent.” Fiscal agents are individuals who have the authority to handle financial matters on behalf of others. They are entrusted with funds that do not belong to them.
Because of this unique arrangement, a significant degree of trustworthiness and honesty is expected of people working as fiscal agents. The following verses reflect the heart and attitude we would want to have in taking care of the financial resources of other people.
II Corinthians 8:21:
Providing for honest things, not only in the sight of the Lord, but also in the sight of men.
Philippians 2:4:
Look not every man on his own things, but every man also on the things of others.
We want to be men and women whose words and deeds can be trusted in the sight of God and man. Whenever we are responsible for the financial resources of others, we want to make decisions that are in their best interests and not our own.
Joseph was a man who had this kind of trustworthy heart and attitude. You may recall from the Book of Genesis that Pharaoh elevated Joseph to the position of steward over all the land of Egypt.
Genesis 41:38-41:
And Pharaoh said unto his servants, Can we find such a one as this is, a man in whom the Spirit of God is?
And Pharaoh said unto Joseph, Forasmuch as God hath shewed thee all this, there is none so discreet and wise as thou art:
Thou shalt be over my house, and according unto thy word shall all my people be ruled: only in the throne will I be greater than thou.
And Pharaoh said unto Joseph, See, I have set thee over all the land of Egypt.
Joseph was responsible to oversee all the affairs of Egypt, second only to Pharaoh. This would have included handling financial matters. With God’s help and Joseph’s wise and faithful stewardship of Egypt’s resources, Egypt became the wealthiest nation in the world at that time. What are some godly principles that Joseph would have applied that helped him successfully manage Egypt’s financial resources? He would have been honest and trustworthy, he would have made decisions that benefited all of Egypt and not just himself, and he would have been faithful and diligent in carrying out his responsibilities.
Proverbs 22:29:
Seest thou a man diligent in his business? he shall stand before kings; he shall not stand before mean [obscure] men.
Believers in whom the spirit of God is can have a tremendous impact in the field of finance today as they live and apply the principles in God’s Word. This diverse field includes all aspects of money management for organizations and individuals. Some of the careers in finance deal with corporate finance, commercial banking, investment banking, financial analysis, financial planning, insurance, and public accounting. In most cases, individuals who function in these categories of service are handling or managing resources that do not belong to them. Be it a company or an individual, the goal is to bring increase and prosperity to those they serve.
The parable of the talents in Matthew 25 gives the examples of two men who believed to bring prosperity to their master and one who didn’t, because of fear. The parable begins with a man calling his servants together to give them a portion of his goods before traveling into a far country.
Matthew 25:15-17:
And unto one he gave five talents, to another two, and to another one; to every man according to his several [his own] ability; and straightway took his journey.
Then he that had received the five talents went and traded with the same, and made them other five talents.
And likewise he that had received two, he also gained other two.
The servant who was given five talents and the one given two talents did well in faithfully negotiating to make gains by trading. They would have been very resourceful in business dealings that would yield a profit. As a result, each of them doubled their original amount given….

This is an excerpt from the September/October 2016 issue of The Way Magazine.
Copyright© 2016 by The Way International. All rights reserved.
For more information on subscribing to The Way Magazine, Click Here